Argo's new LX tops out at 40 km/h, can plow through lakes or rivers, and boasts a more comfortable ride over rough terrain 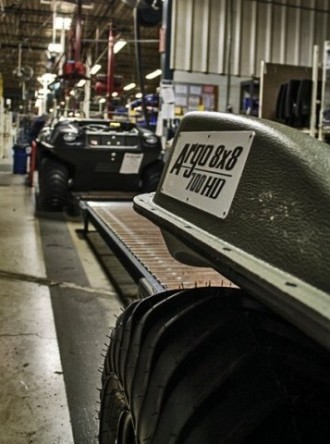 NEW HAMBURG, Ont.—Outdoors enthusiasts who want to take to the backcountry without sullying their boots need look no further than Southwestern Ontario.

With the cottage country crowd in mind, New Hamburg, Ont. amphibious vehicle maker, Argo, has introduced a new lineup of luxury off-roaders. Touting a “go anywhere” reputation, the company says its all-new LX series is designed to make long rides across extreme terrain faster, more comfortable, and more appealing to customers who aren’t quite as comfortable with the idea of roughing it.

“The LX series of Argos represents a dramatic leap forwards for the company,” Bernhard Wagenknecht, Argo’s vice-president of Sales & Marketing said. “In designing the new class of vehicle, we went to great lengths to understand the wants and needs of off-road riders around the world.”

Read deeper: The story behind the hulking eight-wheeled ATV you always wanted
Advertisement

In addition to appealing to a more discerning class of powersports enthusiasts, the LX includes a range of upgrades that may force Argo’s existing client base to consider upgrading. Under the hood, the LX sports an enhanced triple differential ADMIRAL LS steering transmission, allowing it to reach 25 mph (39.5 km/h), or speeds 25 per cent faster than any other Argo on the market. Meanwhile, practical upgrades, such upgraded LED headlamps and floodlights, come standard. Other modern necessities—namely USB power outlets and a sound system—are also included, and meant to make the vehicle more family-friendly. 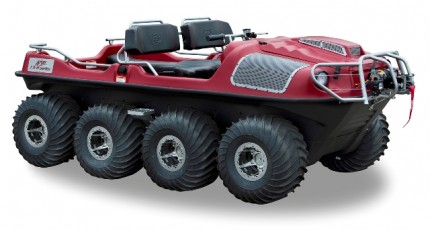 Argo’s new LX. With a top-end speed of nearly 40 km/h, the new luxury vehicle is the fastest Argo ever produced. PHOTO: Argo

From its manufacturing base in New Hamburg, where it operates a 72,000 square-foot plant alongside its parent company, Ontario Drive & Drive, Argo has sold vehicles in more than 200 countries. It churns out about 2,000 Argos a year while recording approximately $65 million in annual revenue.

As it works to appeal to a wider audience with the new luxury lineup, traditional Argo sales have taken a hit recently as a result the downturn in Western Canada’s oil and gas industry. While the company is confident in its latest shift, entering the new customer market does not come without facing off against some familiar competition; big brands like Polaris already occupy a place in the luxury off-road market.

“While the major players within the space all have deeper pockets than us, we’re confident that we have all the necessary ingredients to grow our market share and become a serious contender in the powersports space,” Wagenknecht said. The vice-president pointed to Argo’s expansive dealer network and its strong branding as factors that set it apart.

“Most importantly, we have a product whose capabilities are both radically different and radically superior to what’s currently available on the market,” he added.

Sporting a price tag in the $26,000 range, Argo said the new luxury model is “right in line” with its competitors. Having already begun production on the vehicles, the company said its latest amphibious off-roader is now available worldwide.