The Calgary Facility officially opened in February and has made progress to accelerate its advancement in the DLE technology. 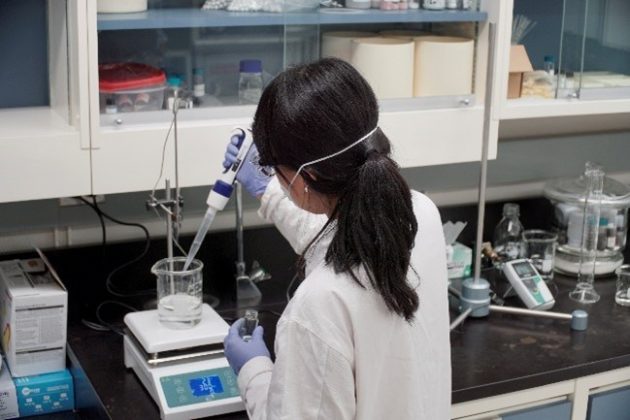 Some of E3’s staff working safely in the development Facility in Calgary. (CNW Group/e3 Metals Corp.)

CALGARY — E3 METALS CORP., an emerging lithium developer, announced that the Calgary Testing Facility is now fully operational and staffed with an expanded team. This Facility positions the Company to achieve its goals as it works towards the construction and operation of a field pilot plant. Through this work, the team plans to fully demonstrate the capabilities and effectiveness of E3 Metals’ proprietary Direct Lithium Extraction technology.

E3 Metals Corp. set out to relocate all lab development from Ontario and North Carolina to be closer to the head office in Calgary, AB. E3 Metals’ Facility operates under a threefold mandate of objectives; to finalize the sorbent synthesis and process development, build and operate a pilot prototype in the facility, and design and guide the fabrication of the field-based Pilot to be operated on the project site in South-Central Alberta.

The Calgary Facility officially opened in February and has made progress to accelerate its advancement in the DLE technology. The manufacturing capabilities for E3’s IX sorbent material are fully operational, as is the continuous flow system that enables advanced process test work.

“E3 Metals’ vision is to become a global player in the production of lithium products for the growing EV battery market,” commented E3 Metals’ CEO Chris Doornbos. “The DLE technology forms the foundation of the Company’s plans to commercialize lithium production in Alberta. I am very proud of the team, which has been working diligently and safely getting the facility operational. I look forward to sharing our continued progress with the market as we advance towards a field pilot.”