Lion and Demers contemplate the deployment of at least 1,500, 100 percent electric ambulances over the next five years. 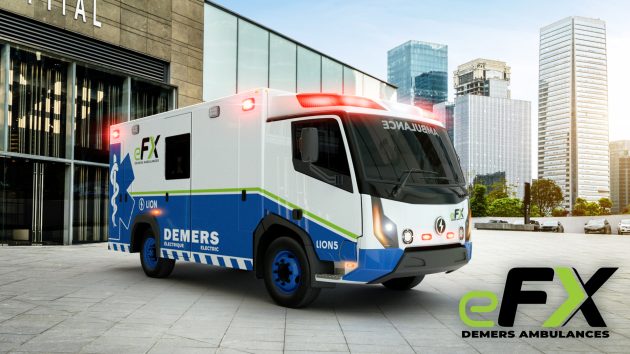 This new model of ambulances, scheduled to be commercialized in the second half of 2022, was developed with the support of the government of Quebec and the National Research Council of Canada Industrial Research Assistance Program.

The Lion5 chassis of the Demers eFX Ambulance will be assembled in Saint-Jérôme by Lion, while the medical compartment and final assembly will be carried out by Demers Ambulances in Beloeil. The 100 per cent electric ambulance will be sold throughout North America, and eventually worldwide, as ambulances sold by Demers and its affiliated brands are already in service in 43 countries. This exclusive mutual agreement between Lion and Demers contemplates the deployment of at least 1,500, 100 per cent electric ambulances over the next five years by Demers Ambulances.

The ambulance will be equipped with a custom-designed chassis. The research and development teams of Demers Ambulances and Lion have redesigned the living space of the two sections of the vehicle while considering the ergonomics and general layout.

Some of the main challenges that paramedics face are the ability to maneuver freely while the ambulance is in motion to provide care to patients while sitting with a fastened seatbelt. The Demers Ambulances’ research and development team, with input from paramedics, has developed features which will be presented prior to certification and start of vehicle production.

“It is with great pride that Lion has participated in this transformative project for society. And this is only the beginning, as the Lion5 chassis developed by Lion could be used in many other applications,” said March Bédard, CEO and Founder of Lion in a company statement.