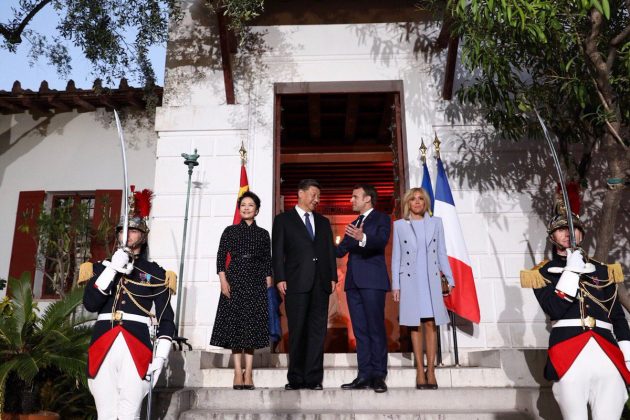 PARIS—Chinese President Xi Jinping was greeted with full honours Monday during a state visit to France in which he is expected to sign multibillion-dollar deals on energy, the food industry, transport and other sectors as well as a bilateral statement on climate change.

French President Emmanuel Macron welcomed Xi and his wife, Peng Liuan, at the Arc de Triomphe monument in Paris. The French National Guard played the country’s anthems. Both leaders laid a wreath at the Unknown Soldier from World War I whose tomb is under the monument.

They then headed to the Elysee presidential palace for a meeting followed by a signature ceremony.

Later, the Chinese president was to be honoured with a state dinner at the Elysee, with prestigious guests including French actor Alain Delon, Michelin-starred chef Alain Ducasse and French-Chinese painter Yan Pei-Ming.

A top official at the French presidency said about 30 deals were expected to be signed in a ceremony at the Elysee, half of them business contracts—for a global amount reaching multibillion dollars—and others bilateral agreements.

The official was speaking anonymously in accordance with the presidency’s practices ahead of the formal signature of the deals.

Cultural announcements were also expected, including a branch opening for the Paris modern art museum, the Pompidou Center, in Shanghai this fall.

The Chinese leader, who previously visited Italy and Monaco to sign deals, arrived in France on Sunday evening where he had a private dinner with Macron in the resort town of Beaulieu-sur-Mer on the French Riviera.

Europe wants to increase its trade with China but on European terms, especially amid U.S.-China trade tensions.

The European Union is China’s biggest trading partner but many in Europe worry about unfair competition from Chinese companies and about China’s global clout.