The U.S. is seeking Meng's extradition to face charges she misled banks about the company's business with Iran 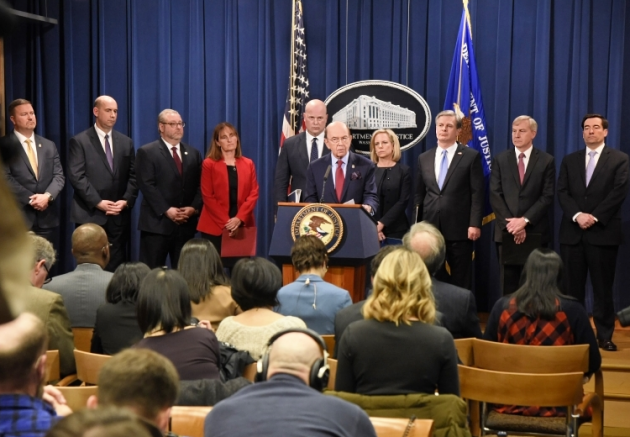 The comments by spokesman Zhang Yesui ahead of the annual session of China’s rubber-stamp parliament followed news that Huawei executive Meng Wanzhou, who was arrested by Canada at the request of the U.S., is suing the Canadian government over her treatment.

Lawyers for Meng, who is staying at a property she owns in Vancouver after her release on bail, said Sunday she is suing the Canadian government, its border agency and the national police force, alleging she was detained, searched and interrogated before she was told she was under arrest.

The U.S. is seeking Meng’s extradition to face charges she misled banks about the company’s business with Iran.

The U.S. has been lobbying its allies to shun Huawei’s products on national security grounds, saying Chinese law requires the company to provide the government with intelligence on its foreign clients whenever requested.

The 2017 law borrows from other countries’ experiences and is designed explicitly to “protect human rights and the lawful rights of individuals and organizations,” he said.

“This kind of behaviour is interference into economic activities by political means and is against World Trade Organization rules. It disrupts an international market order that is built on fair competition,” Zhang told reporters. “This is a typical case of double standards that is neither fair nor ethical.”

Washington’s accusations have been underscored by Meng’s arrest on Dec. 1. Huawei also faces other allegations in the U.S. related to alleged theft of technology.

Meng, Huawei’s chief financial officer, is due in court Wednesday to set a date for the extradition proceedings to start. It could be several months or even years before her case is resolved.

Her lawsuit alleges that instead of immediately arresting her, authorities interrogated her “under the guise of a routine customs” examination and used the opportunity to “compel her to provide evidence and information.”

Meng’s arrest set off a diplomatic furor and has severely strained Canadian relations with China.

A Chinese court also sentenced a Canadian to death in a sudden retrial, overturning a 15-year prison term handed down earlier. Kovrig and Spavor haven’t had access to a lawyer or to their families since being arrested.

China urges Canada to “immediately release Ms. Meng Wanzhou and let her return to China in safety while ensuring her legitimate and justifiable rights and interests and not repeat (Canada’s) mistakes,” Lu said at a daily news briefing.

Lu also said China had fulfilled its obligation to allow access by Canadian diplomats to Kovrig and Spavor, who he said are “suspected of engaging in activities that endanger national security.”

Citing unidentified Chinese authorities, the official Xinhua News Agency on Monday said Kovrig and Spavor worked together to steal “state secrets and intelligence,” the first time the two men’s cases have been linked.

No other details were given and Xinhua said further judicial proceedings would “take place based on the case’s progress.”