A summer session of the Ontario legislature will see Ford and the PCs rolling up their sleeves to enact some key policies, namely trashing cap-and-trade, cancelling a wind farm and ending a university strike 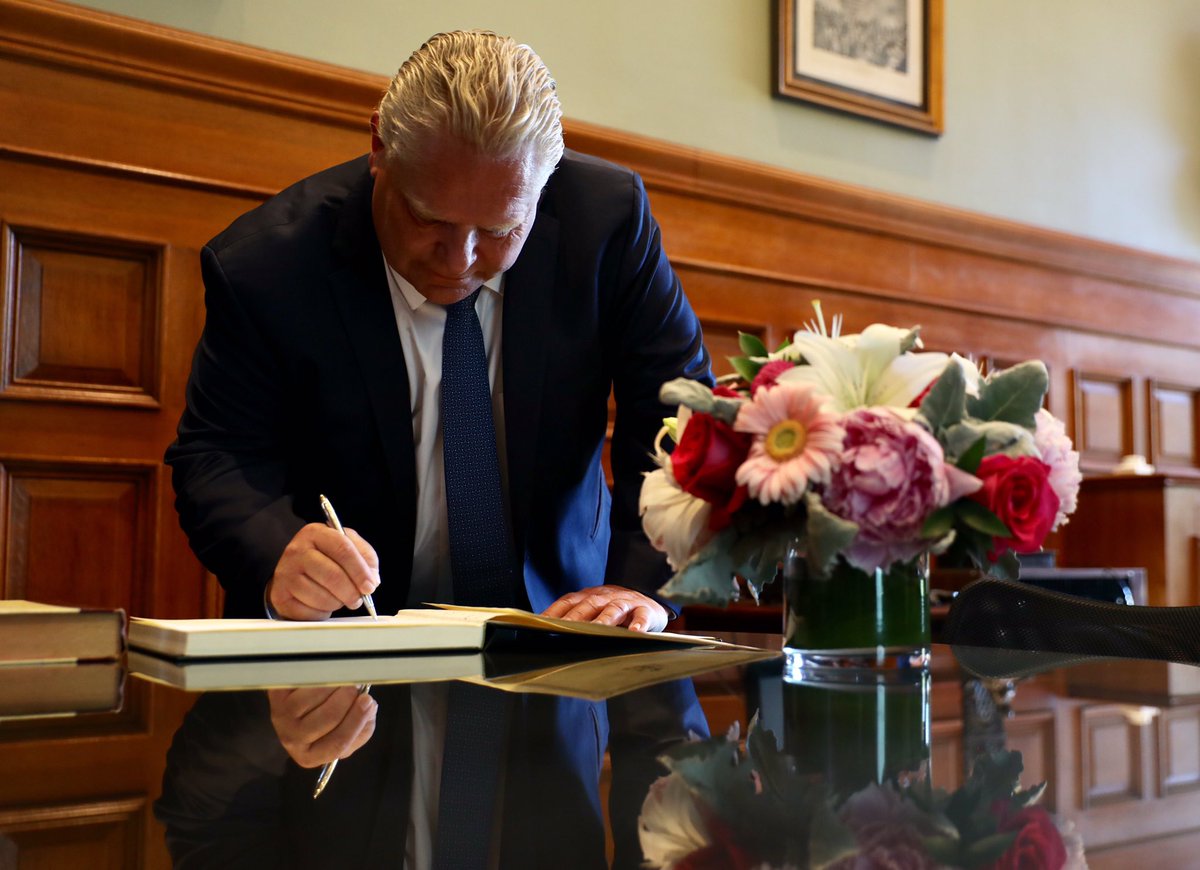 Ontario’s new premier is expected to be busy this summer. PHOTO: Doug Ford/Twitter

TORONTO—Scrapping cap-and-trade, ending the York University strike and cancelling a controversial wind farm project will be priorities for the new Progressive Conservative government when the Ontario legislature resumes this week for a rare summer session.

Progressive Conservative house leader Todd Smith says the government will act quickly on all three items because they are time sensitive and cannot wait until the fall, when the house normally returns.

This will be the first sitting of the new government led by Doug Ford, whose Tories won a large majority of seats in the spring election.

Government legislation to scrap the cap-and-trade system will be tabled and will also prevent a future government from imposing a carbon price in Ontario, Smith said, but didn’t elaborate on how that would be accomplished.

“We will strike the Liberal cap-and-trade tax law from the books and repeal any legislation that would enable a future government to impose a cap-and-trade carbon tax,” he said.

The Tories will also move to end the strike at York University that has been underway since March by introducing back-to-work legislation.

“Our students are not bargaining chips,” he said. “Their futures should not be held for ransom. We intend to use legislative tools to ensure that the interests of the students and their families come first and the students can get back to class for this fall.”

Smith said the Tories will also cancel the White Pines Wind Project in eastern Ontario. The project received notice to proceed during the election period and work has been ongoing at the site.

A local group, the Alliance to Protect Prince Edward County, opposed the project, saying it believed it would be detrimental to the “unique historical, agricultural, cultural and rural character” of the region.

“You can also expect us to act to ensure that going forward local communities are better protected from having these kinds of projects imposed on them against their will,” Smith said.

Smith was asked about other promises made during the campaign like Ford’s pledge to fire the CEO of Hydro One, repeal the sex ed curriculum and open up access to beer and wine in corner stores. The government will address those issues at a later date, he said.

“These three priorities send a clear, serious message about what you can expect from a Doug Ford PC government,” he said. “We’re going to keep our promises. We’re prepared to act.”

Smith also denied opposition accusations that the government has been inaccessible and making too many decisions quietly behind closed doors with Ford himself shying away from taking questions from media.

“Absolutely not, I’m here today, I’m taking questions,” he said. “You can clearly see that Doug Ford in the earlier days of his premiership has gotten down to business. We’ve been checking off all kinds of different priorities that we had promised to do during the election campaign.”

NDP legislator Peter Tabuns said even in the early days of the new Tory government they’re not being open about their work.

“I had difficulty getting into this media conference in the first place,” Tabuns said. “I was told I wasn’t welcome. I was given one exemption. That’s consistent with an approach that’s closed, that isn’t open to the public, isn’t open to the people.”

Tabuns said it’s unlikely the NDP will support any of the bills the government will put forward during the short session including back-to-work legislation to end the York strike and repealing cap-and-trade laws.