As manufacturers transition out of, or bolster their PPE manufacturing operations, the repercussions on the labour market will be important to monitor. 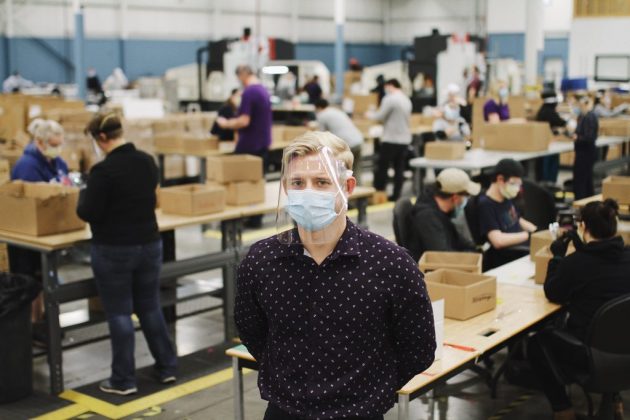 Prior to the pandemic, Canadian Shield, owned by InkSmith, was involved in the education technology industry, working with schoolboards to teach advanced tech skills to students. Since March of 2020, they quickly pivoted to provide PPE and are now heavily promoting their automation technology in the medical devices industry.

Canadian Shield believes that regular mask usage will still be at an elevated level for the next few years, but that the PPE and face mask market has become oversaturated with many different players.

Jeremy Hedges, CEO of Canadian Shield was quick to expand on the issue.

“Most PPE available in the healthcare industries, in hospitals, doctor’s offices, etc. are all outsourced. The majority of it is from China,” said Jeremy Hedges. “The procurement contracts have already sourced medical masks from China, and those contracts are usually 5-9 years long. Healthcare purchasing is not managed by the government, they’re managed by group purchasing organizations, which helps to save money, but makes it to so that Canadian manufacturers are on the outside looking in.”

Canadian Shield is attempting to separate and distinguish itself from the other PPE manufacturers by promoting their automation technology, which purports to produce at 2.5 times the rate of a regular production line. The company mentioned that they are soliciting their technology to OEMs and also recognize that sustainability will be a key issue for mask manufacturers.

When asked about Biden’s ‘Buy American’ announcement in January and how this will affect Canadian manufacturers, Jeremy Hedges gave a mixed response.

“’Buy American’ has me conflicted,” he said. “America is doing a full supply chain audit, and I think Canada should do one too. Contracts for medical devices last for 5-9 years and it’s a difficult place to be. I’m hoping ‘Buy American’ is more ‘Buy North American’. I feel like his announcement is more about getting away from their reliance on Asia, which I think we should do too.”

The headcount at Canadian Shield has grown somewhat since March of 2020, going from 10 to 150, but it remains to be seen how their automation focus will affect this. The company is looking into developing packaging systems to eliminate the labour cost of packing boxes as well. This will likely have an effect on headcount as they continue to automate their production lines. Currently for most manufacturers, the number one cost factor is still going towards labour.

As manufacturers transition out of, or bolster their PPE manufacturing operations, the repercussions on the labour market will be important to monitor, with re-skilling and re-training employees becoming a key focal point to address.