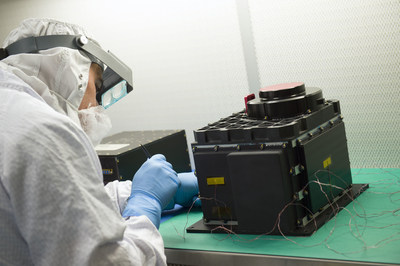 LONGUEUIL, Que.—A laser-based mapping system that is scheduled to slip the surly bonds of Earth and reach a near-Earth asteroid known as Bennu in late 2018 has been shipped south of the border.

The Canadian Space Agency has delivered the Canadian-built OSIRIS-REx Laser Altimeter to a Lockheed Martin Space Systems facility in Denver, Colorado. The OLA is Canada’s contribution to a NASA mission that will attempt to bring a sample of the potentially-historic asteroid back to Earth.

The target, Bennu, is an asteroid that has the potential to impact Earth in the late 2100s.

“OLA will measure the shape and topography of Bennu to a much higher fidelity and with much greater efficiency than any planetary science mission has achieved,” Michael Daly, OLA lead instrument scientist and York University professor, said. “This information is essential to understanding the evolution and current state of the asteroid. It is also provides invaluable information in aid of retrieving a sample of Bennu for return to Earth.”

The OLA was built by MacDonald, Dettwiler and Associates Ltd. and Optech. The device is currectly being integrated onto the spacecraft ahead of the planned launch in Sept. of next year.

If the mission is successful, the CSA will own a portion of the asteroid sample the spacecraft returns to earth. The agency supported the project with a $61 million investment over 15 years.