Exporters need to fight harder for U.S., world market share over next decade 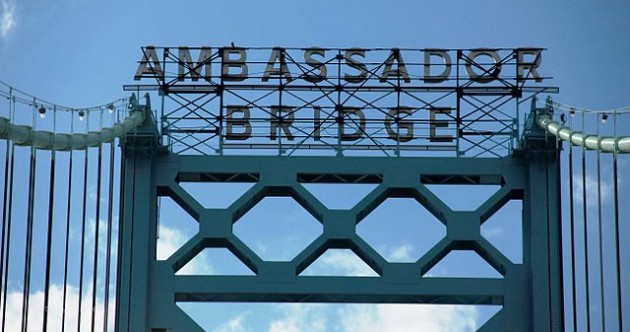 The Ambassador Bridge, which connects Detroit, Mich. and Windsor, Ont. The route is one of the most important trade arteries in North America. PHOTO: Starley, via Wikimedia Commons

VANCOUVER—With a wealth of resources at their disposal, deep talent rosters and unfettered access to the world’s largest market, the cards have always seemed to fall into place for Canadian exporters. At the high water mark in the 1990s, Canadian exports accounted for four per cent of the global export market. All signs pointed to further gains, and the country seemed poised to become an export superpower.

Yet, despite the stacked deck, complacency seems to have set-in. Canada’s share of shipments began to erode and export growth sputtered as other nations swooped in. And now, 20 years later, businesses are left wondering what went wrong. Canadian shipments now account for just 2.5 per of global exports, while the country’s share of the all-important U.S. market has fallen to 14 per cent from 20 per cent a decade ago.

Though a few bright spots remain, HSBC Bank Canada says Canadian exporters must stop harbouring expectations the U.S. market will miraculously recover its taste for Canadian goods and begin creating new opportunities. Indeed, the bank says the time has come for Canadians to focus on growth industries both in the U.S. and worldwide.

“We don’t flip a switch and become an export powerhouse once again,” Canadian chief economist at HSBC Bank Canada, David Watt, said. “We need to work, probably harder than we’ve ever worked before, in order to gain market share in the U.S. and… in export markets across the world.”

The U.S. has always been, and remains, the place Canadian exporters should focus their efforts, but given changing conditions south of the border, export diversification should be more of a priority than ever for Canadian businesses.

“The U.S. right now is going to settle into a much slower growth track compared to previous decades and the growth in imports is likely to slow,” Kevin Logan, U.S. Chief Economist at HSBC USA, said. “That means the fight for a share of the U.S. import market is likely to become even more competitive.”

Canadian businesses will also continue to face increased competition in the U.S. as other countries are able to exploit advantages, such as labour cost savings. A good example is Mexico, whose imports to the U.S. have grown to US$60 billion from $30 billion a decade ago.

And with this stiff competition in traditional export sectors, such as manufacturing, news for Canadian exporters remains bleak.

Even the weakened loonie is unlikely to provide any long-term solution, HSBC said.

“The weak Canadian dollar can provide some help now, but it doesn’t necessarily set the stage for where Canadian exports and what we should be exporting over the next couple of decades,” Watt added.

Instead, the bank argues, Canadian exporters need to focus on value-added products and services that offer buyers something competitors can’t.

HSBC insisted exporters need to be realistic about growth expectations and accept even with a healthier foreign exchange, a turnaround requires a significant amount of work and the rewards may not be immediate.

“Right away we have to be focused on the idea that Canadian exports are not necessarily going to grow at a robust pace,” Watt said. “We’re not going to get the low-hanging fruit. We have to work harder if we want to do better looking forward.”

Meanwhile, international trade agreements such as the Trans-Pacific Partnership, are one more shift that will likely change the dynamics of the market in the coming decades. Though the tearing down of tariff walls will increase competition within Canada and the U.S., it will also give exporters more of a chance abroad.

Ultimately, the hostile global climate means Canadian exporters will have to begin working harder and fighting for market share in areas they once won by default.