Aiming to disrupt the plastic-reliant industry, Flow Water's new multimillion-dollar facility will churn out 120,000 cartons of water a day 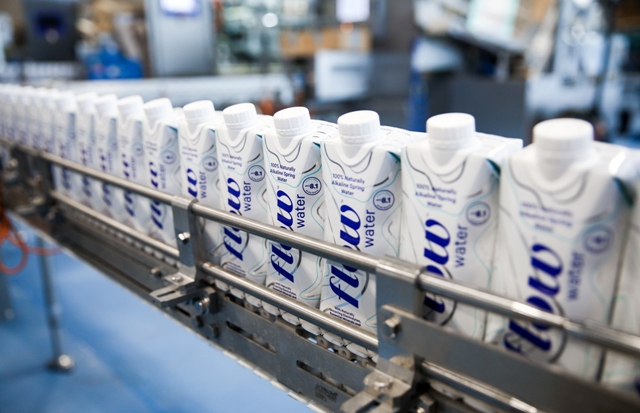 But hold the plastic bottles. The company serves up a different type of water.

Flow officially threw open the doors at the multimillion-dollar site in Aurora, Ont. May 3. It’s the next stage in the two-year-old firm’s effort to disrupt the $15 billion North American market for bottled water.

“We’re excited just to get out of the gates,” Nicholas Reichenbach, Flow’s founder and CEO, said in an interview.

“The plant allows us to bring our cost down so we can actually ship the product outside of Canada and into the U.S. and still make our margins,” he added.

Flow sources its water from an artesian spring in Bruce County, Ont., but it’s the company’s choice of packaging that really differentiates it from the traditional competition on store shelves.

Unlike most of its competitors, which use plastic bottles to package their water, Flow’s new 21,000 sq. ft. facility employs Tetra Pak technology—a type of carton best known in Canada for schoolyard juice boxes. Made from paperboard, Tetra Paks are recyclable and currently about 70 per cent renewable, which jives with Flow’s commitment to the environment.

And that sentiment seems to have struck a chord with consumers.

Since launching in 2015, Flow has found its way onto the shelves at 4,500 retail stops across the country—from Loblaw and Whole Foods grocery stores to Rexall pharmacies. It’s experienced 300 to 400 per cent growth in each of the two previous years and began pushing into the U.S. market in earnest last year. It’s priced to compete with other “premium” water brands such as Evian and Fiji.

The company was originally co-packing its product, but with management expecting to keep up the same blistering rate of growth over the next few years, it opted to move into its own space.

“It became very obvious with our growth in volume and quality control and product innovation that we needed to invest in our own plant,” Reichenbach said.

The new plant is capable of churning out two Tetra Paks of Flow Water every second, or about 120,000 units per day. It uses an A3/Flex filling machine from Swiss-based Tetra Pak as its primary piece of equipment.

Keeping up with its environmental commitment, the company is also offsetting all of the energy used at the plant with the help of renewable firm Bullfrog Power. This includes the emissions generated by Flow’s tanker truck—affectionately known as “Buttercup”—which makes a daily trip between the Aurora plant and the company’s spring in Bruce County.

The plant opening comes at a time when water taking in Ontario has come under increased scrutiny. Last fall, food giant Nestle outbid a small municipality for access to a well, setting off a firestorm about how little the province charges companies to take water.

Flow says it keeps an eye on its water source using monitoring wells and works with hydrologists to ensure the spring remains sustainable.

The new plant has already created 10 new jobs in Aurora and Flow expects it to create another 10 over the next 12 months.