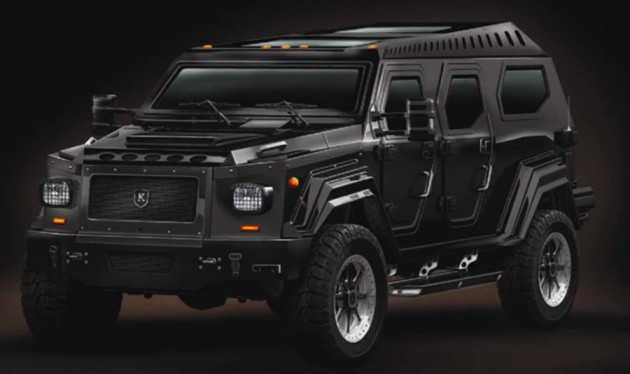 The Conquest Knight XV is an opulent armoured beast made in Canada. PHOTO: Screen shot from youtube video

What they’ve seen is the Conquest Knight XV. It is a rare beast. There are only 17 in the world, sold to the likes of Middle Eastern royalty and a basketball star.

The vehicle starts at $629,000, but often sells for several hundred thousand dollars more. It weighs twice as a much as a GMC Hummer and it can stop a bullet from an AK-47.

And it’s made in Toronto. By hand.

It takes about six months to build a Knight XV, and Conquest Vehicles actually machine their own parts out of stainless steel and aluminum.

The opulent armoured Knight XV (which stands for “extreme vehicle”) is a magnet for attention everywhere it rolls. The Canadian Press saw proof on a recent ride through downtown Toronto.

One man, overcome with excitement, drives beside the truck screaming “that is the best f–king truck I’ve ever f–king seen!” as he pumps his fist out the window.

“I thought it was the new Batmobile,” another onlooker, Sean Culham, says as the truck sits outside a posh downtown hotel.

That’s the reaction William Maizlin was hoping for when he dreamed up the idea.

Maizlin, the company’s former president, went to a friend (a silent partner, he says) with the idea of building a military-style truck for the consumer market back in 2006. He spent nearly two decades in the military industry, focusing much of his efforts on armour.

They built the first one in King City, north of Toronto, and brought it to a car show in Las Vegas in 2008. That sparked interest, and Conquest Vehicles was born.

The Knight XV is gargantuan, weighing in at 6,400 kilograms. Each ballistic steel door weighs 160 kilograms, or about the size of two small men.

This truck doesn’t guzzle gas. It inhales it—about 34 litres per 100 kilometres, according to the company.

But the last thing on the minds of Knight XV’s owners is the cost of fuel. The most blinged-out version costs about the same as the average price of a Toronto home.

“The interior is fully customizable,” says Tim Chapman, the president of Conquest Vehicles, on a tour of the warehouse in north Toronto in late June.

There are four trucks in the warehouse at the moment, including a nearly completed redesigned model that is about a half-metre longer and 20 centimetres wider than the original.

The only one owned in Canada is the company demo truck—most are overseas.

“There is no market in Canada for armoured vehicles,” Maizlin says on the phone. “And thank God, because Canada is a very safe country, but there are other hot zones in the world where there is a big need for security.”

As Chapman points to the various security measures of the truck—the tires can get shot and still run for 80 miles—he talks about the Knight XV that went rogue in Ukraine.

That truck was taken by anti-government protesters. It was later found in the garage of Viktor Yanukovych Jr., son of the former Ukrainian president of the same name, who fled for Russia last year.

Chapman says they sold the truck to a man in Ukraine who may have acted as a broker with the Yanukovych family or simply resold it to them. The truck has been repainted in camouflage colours and is being used in the conflict.

He knows this because those who took it have called Conquest Vehicles asking for parts. He referred them to Ford because the truck is built on an F-550 chassis.

Despite all the truck’s security features, Chapman and Maizlin both say its appeal to many of its drivers is the sheer audacity of its appearance. 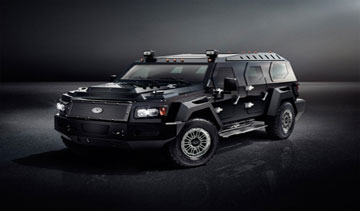 The first EVADE is set to roll off the assembly line in the fall of 2012. PHOTO Conquest Vehicles

Basketball star Dwight Howard bought one, as did the prince of the United Arab Emirates. They’ve even made a few non-armoured versions—called the Evade—for clients in countries that don’t allow armoured cars.

Neither Chapman nor Maizlin will name other names because of confidentiality agreements, “which is ironic because they’re buying it for the attention,” Maizlin says.

Both said the clients are all of a similar ilk: rich, flashy and, in some cases, concerned with their own safety.

“They are collectors,” Chapman says. “They want to make an impression, to have something different, and some are worried about their safety.”

That’s why the windows are 3.2 centimetres thick—enough to stop a bullet from an AK-47. And they roll down, apparently a rarity for bulletproof windows.

Chapman is, in many ways, the opposite of the truck he builds. He is slight, soft-spoken and drives a BMW M6 sports car.

He gets into into the back seat of one of the trucks, and eases into the soft Muirhead leather. Despite the massive room, there are only two seats in the back.

There is a television, and an iPad controls everything. One swipe and the electrostatic windows blacken.

Conquest is owned by Elgner Group Investments Ltd., a private company made up of entrepreneurs. Chapman says they have big plans for the future.

A group of Chinese investors is considering buying a few, he says.

“China seems to the be the hottest market for it,” he said, adding that they’ve already sold seven cars to wealthy Chinese.

The company hopes to ramp up production to 25 trucks a year by 2017.

For Maizlin, leaving the company was difficult. It was his baby, but he had a different vision for the company than the investors, so he left to start his own company.

He remains proud of Conquest.

“We have very talented people in Canada. We have great car guys here,” he says. “And Conquest is a Canadian car company. And that is a rare, special thing.”