"The centre of economic gravity in the world is certainly shifting towards Asia," says Prime Minister Trudeau. Experts suggest it could take years to finalize an agreement with the 10-nation ASEAN bloc 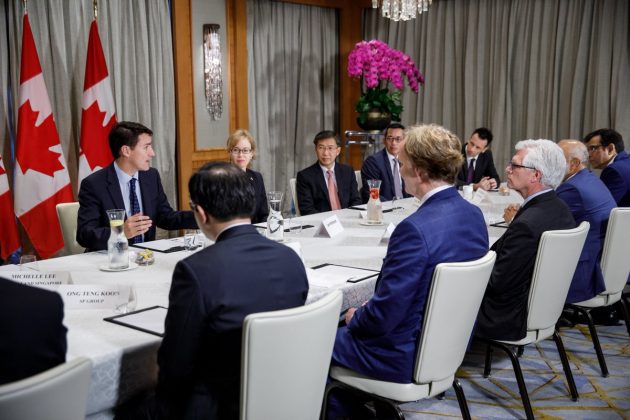 SINGAPORE – Canada wants to walk down the path towards a free trade agreement with a bloc of 10 Asian nations as early as next spring, Prime Minister Justin Trudeau said Wednesday in his only opportunity to directly address the leaders of the Association of Southeast Asian Nations.

A preliminary study of a Canada-ASEAN trade agreement has been done, but experts suggest it could take years to finalize an agreement with the 10-nation bloc, which includes the Philippines, Indonesia, Brunei, Singapore, Malaysia, Thailand, Vietnam, Laos, Cambodia and Burma.

Trudeau told a leaders’ luncheon that exploratory talks could be wrapped up by the spring and negotiations to begin soon thereafter – timing that would be close to next fall’s federal election.

ASEAN nations combined have nearly 650 million people, an economy of US$2.8 trillion, and are already Canada’s sixth-biggest trading partner.

“Canada is resolutely pro-trade and Canada is very aware that the centre of economic gravity in the world is certainly shifting towards Asia and specifically towards southeast Asia,” Trudeau said during his remarks.

“The ASEAN nations represent extremely exciting, growing economies, looking to take their place in the world and Canada is very excited about working with you on that.”

He also made a pitch at the luncheon for ASEAN’s support when Canada bids for a seat on the United Nations security council.

Carlo Dade, an expert on Pacific trade with the Canada West Foundation, said there is no benefit to having a trade deal with ASEAN, since four of them – Brunei, Malaysia, Singapore and Vietnam – are already part of the Pacific trade deal and others have expressed interest in joining.

The agreement, known as the Comprehensive and Progressive Agreement for Trans-Pacific Partnership – or CPTPP for short – is an ambitious agreement that likely won’t be matched if Canada negotiates one-on-one with ASEAN because their deals tend to be less comprehensive, Dade said.

“I’ll just be blunt: Trade negotiations with ASEAN, I think, would largely be a waste of time.”

Trudeau has spent two days in Singapore trying to situate Canada as a more favourable place for Asian companies than the United States, playing up Canada as a stable location economically and politically for trade and investment.

On Wednesday, he also met with Chinese Premier Li Keqiang, kicking off the meeting by saying the two leaders would have a “frank and open” talk.

International Trade Minister Jim Carr said the government remains interested in having a deal that helps female entrepreneurs, Indigenous Peoples and promotes other Canadian values, but warned a final agreement will take time to pull together.

Later in the day, the Prime Minister’s Office said the two talked about expanding trade in agriculture, energy and clean technology sectors. The prime minister also raised concerns about China’s treatment of Uyghur Muslims and other minorities in China’s Xinjiang region during the meeting, Trudeau’s office said.

While the two sides did agree to find ways to reduce plastics and pollution in the planet’s oceans, countries, including those in Asia, are trying to find a counterbalance to China’s growing influence in the region, said Shuvaloy Majumdar, a Munk Senior Fellow at the Macdonald-Laurier Institute.

“It strikes me that the prime minister is moving in exactly the wrong direction with the wrong partner,” he said.

Coupled with the fact that Trudeau left last year’s ASEAN summit having angered the host nation’s leader, Majumdar said he doesn’t think Canada is well positioned in the region.

Trudeau angered Philippine President Rodrigo Duterte last year over comments about the Philippine government’s war on drugs, which has earned widespread condemnation for leaving thousands of suspects dead. And in September, MPs voted unanimously to strip Myanmar’s leader, Aung San Suu Kyi, of her honorary Canadian citizenship for her role in the atrocities against her country’s Rohingya people.