Following the public health's order of priority for vaccination, CAE has committed to vaccinating a minimum of 15,000 to 25,000 Quebeckers from April to August. 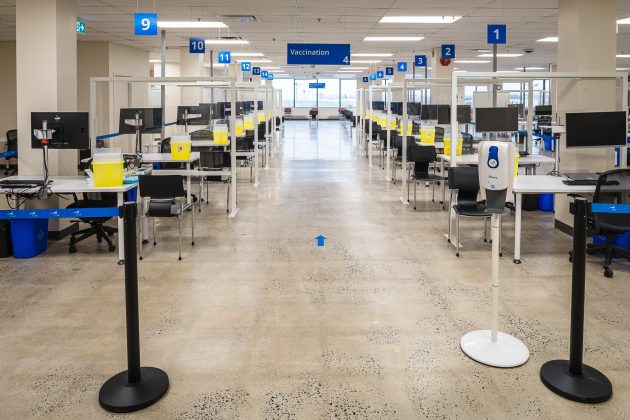 MONTREAL — On Apr. 26, CAE announced the opening of its COVID-19 Vaccination Centre, located at CAE’s headquarters in the St-Laurent borough. CAE has been working in collaboration with the CIUSSS du Nord-de-l’Île-de-Montréal and Quebec’s Ministry of Health and Social Services for operational support to ensure a safe and efficient vaccination roll-out. Several partnering companies have also offered resources and support — including ABB, CGI, Essilor, Intact, LEM experts-conseils, L’Oréal Canada, Medicom, Moneris, Pyure, Rolls-Royce Canada, Safran, Solotech and Top Aces. Partners contributed to this initiative by donating monetary contributions and/or protective and sanitary equipment, as well as medical and administrative personnel to staff the Centre.

“I am pleased to announce the opening of the first workplace vaccination centre in Quebec to support the government during this mass roll-out with extra resources and to reduce pressure on the healthcare system. I would also like to highlight the contributions from our business partners who swiftly answered the call for support in the fight against COVID-19,” said Marc Parent, President and CEO of CAE. “This is a collective effort that will help save lives, allow for a faster economic recovery and a safe return to normal life. I would like to extend my sincere gratitude to the CIUSSS du Nord-de-l’Île-de-Montréal and Quebec’s Ministry of Health and Social Services staff for their collaboration and support throughout the process.”

“Being where the people of our territory are, means being anchored in their community, which is one of our four organizational priorities. By offering vaccination in the workplace in partnership with CAE, we are responding to this objective,” said Frédéric Abergel, President and CEO of CIUSSS du Nord-de-l’Île-de-Montréal. “It is with collaborative initiatives like this that we will succeed in vaccinating our entire population quickly and effectively. ”

Following the public health’s order of priority for vaccination, CAE has committed to vaccinating a minimum of 15,000 to 25,000 Quebeckers from April to August.

As announced on March 19, CAE played a pivotal role by initiating mobilization efforts with many large Quebec and Canadian companies so that they can participate in the vaccination dissemination. Since then, the creation of 23 workplace vaccination hubs across the province has been announced. CAE salutes the receptiveness shown by the Quebec government to this collaboration with the private sector, which will contribute to a faster economic recovery for all Quebeckers.