Top-end model will slot into Cadillac's lineup ahead of CTS, XTS products; will be built at Detroit-Hamtramck plant 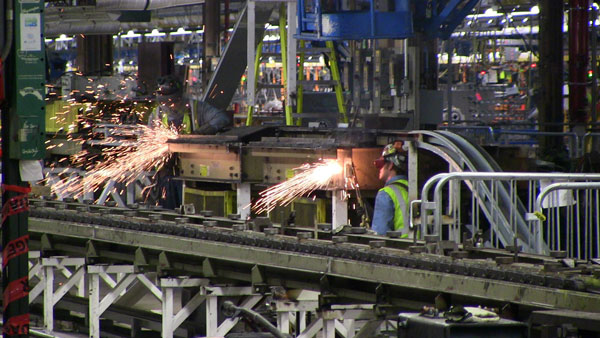 Tooling has already been installed at GM’s Detroit-Hamtramck plant to build an all-new range-topping Cadillac next year. PHOTO GM

DETROIT—General Motors Co. (GM) luxury unit Cadillac has announced plans to launch assembly of a range-topping, “high-technology” vehicle at one of the automaker’s Michigan plants late next year.

Part of the brand’s plan to “elevate its growing portfolio,” the top-end model will slot into Cadillac’s lineup ahead of its CTS and XTS products and will be built at GM’s Detroit-Hamtramck plant.

Cadillac’s all-electric ELR is already built at the plant, which is also home to the Chevrolet Volt, Malibu and Impala models, as well as their respective sister cars sold under the Vauxhall, Opel and Holden banners in the European and Australasian markets.

“The objective for this upcoming model is to lift the Cadillac range by entering the elite class of top-level luxury cars,” Cadillac president Johan de Nysschen said in a statement. “Currently in development, this new rear-wheel drive-oriented sedan uses completely new, custom-designed materials on a unique vehicle architecture.

“In addition to new technology in the car itself, we are instituting innovative manufacturing techniques to assemble it with the precision deserving of a luxury make.”

The addition of the new Cadillac to Detroit-Hamtramck’s roster of products is part of a US$384-million investment in the facility announced in April.

GM said tooling and equipment unique to the assembly of the new model have already been installed at the facility.

The as-yet unnamed Cadillac will go into production in the fourth quarter of 2015, according to the automaker, with the public debut scheduled for the first half of next year.