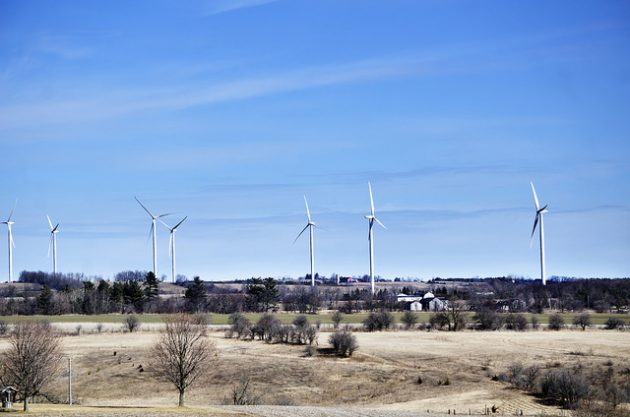 The question of whether or not wind turbines have decreased property values in Ontario has been a point of contention in recent years, and fuelled by the rapid expansion of the wind energy industry following the implementation of the Green Energy Act in 2009. (The current provincial government is in the process of repealing the act.)

Residents in communities with existing and proposed wind farms have felt their concerns have been largely ignored by the provincial government, which is able to override municipal decisions regarding where wind farms can be located. Wind farm development was allowed to proceed despite not reaching resolution on this issue. This is due in part to a lack of scientific evidence regarding these impacts.

To determine whether property values have changed as a result of wind turbines in Ontario, I conducted a study using sales of rural residential properties. In particular, the study focused on counties in southern Ontario where wind farms have been constructed.

This study also addresses underlying reasons for the lack of consensus across related studies in other jurisdictions. There are a number of potential contributing factors, including the possibility that differences in attitudes toward wind energy may influence the likelihood of property value impacts. Areas with greater opposition to wind energy development may be more likely to experience negative impacts on property values. I examined the degree to which differences in attitudes influenced property values in Ontario.

Ontario provides an ideal setting to examine whether differences in attitudes influence property value impacts. To date, 95 municipalities have passed resolutions to declare themselves “unwilling hosts” for wind farms. They did this to protest the provincial government’s ability to override municipal decisions on the location of wind energy facilities.

The first component of the study determined whether wind turbines have affected property values in Ontario. I analyzed sales data from more than 22,000 rural residential properties across 14 counties in southern Ontario between 2002 and 2013. Many of these properties are in close proximity to wind turbines.

Wind turbines caused negative impacts on property values up to four kilometres away, with these impacts ranging from a four per cent to an eight per cent decrease in property values. The magnitude of the impact increased as the number of wind turbines in close proximity to the property increased. These results support the concerns of residents of communities with existing and proposed wind farms regarding the potential loss in value of their properties due to wind turbines.

To determine whether differences in attitudes influenced the observed impacts of wind turbines on property values, I divided the sales data into two groups: those in unwilling-host municipalities and those in municipalities that had not made such declarations, which I refer to as “unopposed municipalities.”

The analysis of the sales data for each group yielded interesting results. Wind turbines had a negative impact on property values only in unwilling host municipalities, while no impacts were observed in unopposed municipalities. These results suggest that residents’ attitudes toward wind energy may influence the nature of turbine impacts: jurisdictions with greater opposition to wind turbines may be more likely to experience negative impacts on property values.

Prior to my study, there had not been a comprehensive study conducted in the province on the impacts of wind turbines on property values. The results may help to explain the lack of consensus that exists across prior studies regarding this issue. It could be the case that the concerns expressed regarding potential negative impacts draw considerable local attention to this issue. This, in turn, could influence perceptions of turbine impacts and the resulting demand for affected properties.