The electric car maker has been silent on how many companies have put down deposits, but the roster includes, Wal-Mart, Meijer and Loblaw, among others 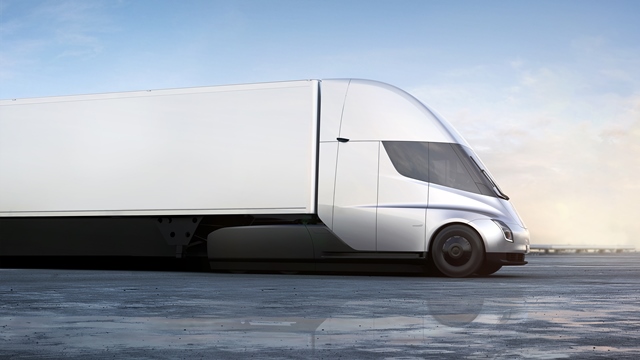 The electric car maker unveiled its big rig last month. Production on the first vehicle is scheduled to begin in 2019. PHOTO: Tesla

DETROIT—Your beer could soon be delivered in a Tesla.

Brewer Anheuser-Busch—which owns Budweiser and other brands—has placed an order for 40 all-electric semis.

Anheuser-Busch says it’s one of the largest orders Tesla has received for the truck, but Tesla Inc. isn’t confirming.

At least one—from soft drink and snack company PepsiCo—is larger. Following the AB InBev announcement Dec. 7, an official confirmed to Reuters that the maker of Mountain Dew soda and Doritos chips has order 100 of the new trucks.

Tesla unveiled the Semi last month alongside its speedy new Roadster. Production will begin in 2019. Customers can put down a $5,000 deposit to reserve one.

Anheuser-Busch says the big rigs would be part of a 750-truck U.S. fleet that transports products from breweries to wholesalers. The trucks will help the Belgium-based company meet its goal of reducing global carbon emissions by 30 per cent in 2025. Other manufacturers and retailers that have placed pre-orders for the truck have similar plans to scale back emissions in mind.

Tesla won’t say how many companies have put down deposits. But Wal-Mart Stores Inc. and midwest retailer Meijer Inc. are among those that have placed orders. In Canada, grocery chain Loblaw disclosed a 25-truck order last month.