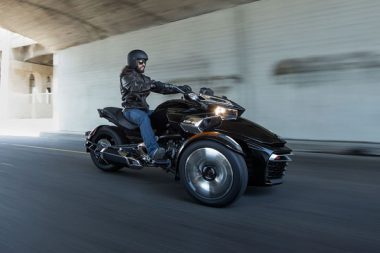 MONTREAL—The maker of Ski-Doos, personal watercraft and three-wheel Spyder vehicles is evaluating whether to enter the two-wheel motorcycle business to help power its aggressive growth plans.

“We are in an ongoing process of evaluating the market, looking at different possibilities, trends,” BRP spokesman Sylvain Morissette said after an industry analyst suggested motorcycles could be the Quebec-based company’s next driver of growth.

“Motorcycles could be an option as we’ve done in the past.”

Morissette said BRP is looking at many growth opportunities, but wouldn’t say how soon a decision on motorcycles could be reached or when they could enter the market.

For now, the company is focused on expanding its current products. It introduced three new 2017 models at a industry event in Orlando, Fla. Aug 17. BRP will sell a Can-Am Maverick X3 side-by-side vehicle, a new Sea-Doo Spark TRIXX, and a Can-Am Spyder F3 Limited.

The Can-Am Maverick is the third side-by-side vehicle introduced since last September. BRP has vowed to expand the product line every six months through 2020. The company based in Valcourt, Que., expects earnings to grow by nine per cent annually to reach $6 billion by fiscal 2021.

“This market is supported by strong fundamentals for the foreseeable future, and we think BRP has the key pieces in place to enter the segment either organically or through an acquisition,” he wrote in a report.

Poirier said 82 per cent of North American powersports dealers carry motorcycles and would welcome adding a new product. BRP has a global distribution network with more than 4,200 dealers in some 100 countries.

He said BRP could leverage its engine expertise and take advantage of its Mexican manufacturing operations while boosting aftermarket sales.

The dealer, which sells five motorcycle brands, says BRP would have a challenge entering the market based on the struggles faced by other manufacturers.

“I think it’s a tough market to come in with a brand new product and a lot of guys have a lot of years of experience under their belts,” he said in an interview.

He doubts BRP will proceed, but says buying another manufacturer would be the firm’s smartest move. That would allow BRP to enter the market with an established brand. Yet Galliher said BRP has a tendency to start from scratch and take advantage of its engineering expertise.