The uptake was slow, but the numbers are up and manufacturers are getting on board. Three-wheelers offer the exhilaration of a standard motorcycle but without the physical strain 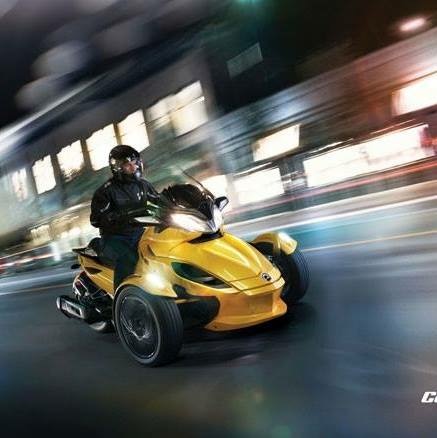 PHOTO: Boomers are scrambling toward the three-wheeled motorcycle

MONTREAL – Pam Fraser had never been on a motorcycle – or anything resembling one, such as the three-wheeled Piaggio scooter her husband Brian hauled home from the dealership 10 years ago.

“I thought for sure he is going to kill himself on this thing,” she said.

Brian, a firefighter at the time, relented, trading in the Piaggio a few months later. “The next thing you know he’s buying a Can-Am Spyder,” recalled Pam, 64. “Boys and their toys.”

Brian, 66, who gave up biking as a young man, implored her to try the trike, made by Quebec-based BRP Inc. and resembling one of the company’s Ski-Doos on wheels – one in the back, two wide apart in the front.

“So I put on my snowmobile helmet and popped on behind him and went for a little ride,” Pam said, her risk aversion honed by decades in personal insurance. “I was hooked.”

The roadster has rerouted their retirement. Pam and Brian have put more than 250,000 kilometres on seven Spyders over the past decade. They’ve trekked to trike rallies in Missouri, Tennessee and North Carolina. Last July they rode to Deadwood, S.D., notching 1,000 kilometres a day.

“I wouldn’t say it’s a hobby; it’s more of a lifestyle,” said Pam, who moderates the Ontario Spyder Ryders Facebook page, which counts more than 770 members. “It gives you a sense of freedom that you don’t have in a car.”

The retirees from Orangeville, Ont., are part of a growing wave of baby boomers who are rediscovering life on the open road aboard the motorbike’s more stable cousin, the three-wheeled motorcycle. And manufacturers are scrambling to get on board, aiming to expand a mere industry sidecar into a major driver of sales while dodging licensing obstacles and derision from the hog elite.

The rest of the country has been slower to adopt, but producers have their eyes on sunnier climes than Canada.

Companies like BRP, Harley-Davidson Inc., Quebec-based Campagna Motors and Minnesota’s Polaris Industries are looking to expand in the U.S. as well as Australia, Japan and Europe.

BRP chief executive Jose Boisjoli hopes to triple global sales of three-wheelers over five years to more than $1 billion – or nearly one-quarter of total company revenues in 2017 – driven largely by the newly released Ryker roadster. The sporty trike chops the Spyder’s starting price of US$17,000 to US$8,500 in a bid to attract younger and less wealthy riders.

Ultimately, though, youth is not where it’s at. The average Spyder customer is 62, Boisjoli said.

“To be honest, at the beginning we were saying we should attract younger people. But lately we’re saying, why? Retired people have disposable income. They have time,” he said.

Related:
‘Baby Boomer’ retirements will cause a huge wave of business transfers: CFIB

Enthusiasts say three-wheelers offer the exhilaration of a standard motorcycle but without the physical strain that comes with it.

Still, some traditionalists remain resistant, even hostile, to three-wheelers, said Jeff Maguire, an account director with a Toronto-based ad agency that focuses on power sport products.

“Most motorcyclists wave to each other,” he said. “I’ve noticed with Can-Ams, that doesn’t really happen. It’s not that they don’t wave, but they don’t get a wave back.”

The sentiment may be “snobbish,” but having tried three-wheelers, he said he gets where it’s coming from.

“It took all the things you get from riding a motorcycle – the freedom, the handling, the ability to lean into a corner – and sucked the fun out of it,” said Maguire, a third-generation biker who owns two Harleys and a 1972 Honda.

On top of rider ridicule, licensing and regulations pose another hurdle. Some states, such as California, allow anyone with a driver’s licence to ride off the lot with a three-wheeler, though getting that licence can still be a deterrent.

In Quebec, car drivers need only complete a special seven-hour course to drive a BRP roadster, which the company makes available at 17 driving schools in the province.

Many states and several provinces and territories, however, require riders to enter a graduated motorcycle licensing system that amounts to a barrier to entry, he added.

Products such as the Harley trike and Seattle-based Ural Motorcycles – famed for its sidecars – present a viable option to aging hog riders and disabled individuals, he said

“In the old days, a lot of senior riders would get a sidecar to balance their vehicle – and put their dog in,” he said.

“I have seen a lot of students with disabilities, guys who have artificial limbs…Their intentions are often to go and get a three-wheeled machine. It think it’s great, it’s fantastic.”

“‘As a real man, you ride two wheels, you don’t ride three.’ I think those stigmas are dropping today, I really do, because the technology is so fun to play with,” he said.

“Back in the old days, you would never, ever see a group of Harley riders riding with sport bike riders. Now you see it everywhere. Everyone’s riding together.”