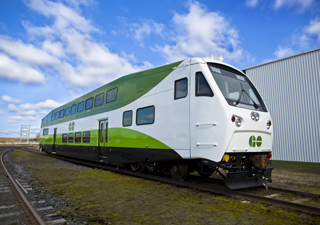 The latest iteration of the company’s two-level trains has upgraded door and air conditioning systems, as well as greater energy efficiency. PHOTO: Bombardier

BERLIN—The delayed delivery of new streetcars for the Toronto Transit Commission and concerns about the shipment schedule for the light rail vehicles designed to run on Toronto’s Eglinton Crosstown have not deterred Metrolinx from ordering more GO Trains from Bombardier Inc.

The company’s Transportation division has announced it has signed a $428 million deal with the Greater Toronto and Hamilton Area transit provider to build 125 new BiLevel commuter rail cars. The cars will be built at Bombardier’s Thunder Bay plant and enter service on the expanding GO rail network in and around Canada’s largest city.

“Bombardier is Thunder Bay’s largest private sector employer,” Bill Mauro, MPP for Thunder Bay-Atikokan, said. “This investment, the latest in a long series of investments by our government in mass transit will help ensure that a significant workforce remains at Bombardier contributing greatly to the economy of Thunder Bay and Northwestern Ontario.”

The plane and train maker’s Thunder Bay facility has faced significant scrutiny recently—particularly from the TTC—after Bombardier admitted it would not meet its delivery deadline on a $1.2 billion streetcar order. Meanwhile, Metrolinx has also expressed concern about the delivery of new LRT vehicles; according to The Toronto Star, it threatened the company with legal action in June.

Production on the new train cars is expected to begin in 2018, with the first delivery scheduled for 2020.