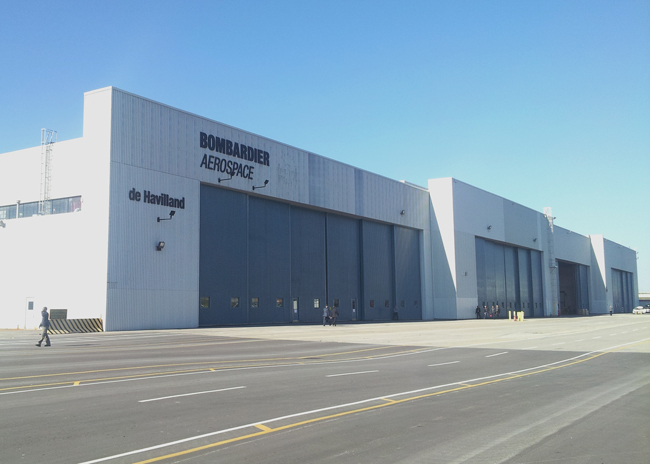 Bombardier plans to keep final assembly of the turboprops at its Toronto facility at Downsview Airport. PHOTO: David Kennedy

MIRABEL, Que.—Bombardier Inc. will not factor the fraught NAFTA renegotiations into a decision on whether to shift component work on its Q400 plane from Toronto to Mexico or another lower-cost region, the Canadian plane and train maker said Sept. 12.

The Montreal-based company has announced it will reduce costs on the turboprop plane by moving Q400 wing and cockpit work from Toronto. However, when and where that work will move hasn’t been decided, said Todd Young, vice-president of customer service and support for Bombardier Commercial Aircraft.

“The final decision will be based on economics,” he said at an all-day session updating the company’s commercial aircraft programs.

“We will not make a decision that is not going to save money for the Q400.”

The component assembly work could be transferred to its low-cost centres in Mexico or Morocco or be outsourced to third-party suppliers. The final assembly of the plane will be completed in Toronto.

Canadian companies with manufacturing capacity in Mexico are worried that the U.S. push to renegotiate the trade deal between the three North American countries will add restrictions that make it costlier to maintain their operations or lead to higher tariffs if the deal is terminated.

Unionized workers at the Toronto plant originally objected to the company’s efforts to shift the work to make the plane more competitive. However, they eventually agreed to the move.

The company also said in its market update Tuesday that there is a global market of 12,550 for the size of commercial planes it produces, worth US$820 billion over the next 20 years.

The 100- to 150-seat segment, which includes its CSeries passenger jets, will lead the way with 6,800 deliveries valued at US$580 billion at 2017 list prices. That’s down from 7,000 forecast two years ago, which the company said is due to a slowdown in China.

Bombardier expects to capture about half the global market with its controversial CSeries, which it says is burning three per cent less fuel than originally promised—resulting in lower operating costs.

The improvement hasn’t yet translated into new orders but marketing head Patrick Baudis said it is one of the plane’s selling features.

The company’s CSeries jets continue to be at the centre of an ongoing trade battle with United States-based Boeing, which has accused Bombardier of selling the jets to U.S.-based Delta Airlines at an unfairly low price with help from government subsidies in Canada.

David MacNaughton’s comments are the first revelation that the Trudeau government has spoken directly with Boeing about the dispute, which has become a flashpoint for the Liberals.

They also come as media reports say British Prime Minister Theresa May, who will visit Canada next week, defended Bombardier during a recent call with U.S. President Donald Trump.

Bombardier said it welcomes the support from Britain but wouldn’t say what it feels would be an appropriate settlement.

“I’m not going to speculate on the outcome of a deal. We will be strategic in our thinking and we’re going to do what’s right for our people here at Bombardier and for aerospace in Canada,” Fred Cromer, the company’s president of Commercial Aircraft told reporters.