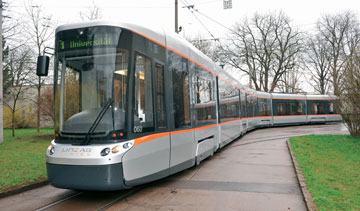 The Montreal-headquartered company has received orders for more than 1,500 trams to date. PHOTO Bombardier

The company has locked in an order for 47 FLEXITY trams from the City of Berlin. Valued at approximately US$190 million, the order is based on options from a 2006 contract, under which the Montreal-based firm agreed to deliver a maximum of 206 vehicles to the city.

“Having handed over the 100th tram to BVG in summer 2015, this call-off is yet another important milestone in the long and successful cooperation in the German capital,” Carsten Bopp, head of Light Rail Vehicles at Bombardier Transportation, said.

The Berlin Transport Authority said the additional order is in response to the growing number of residents opting for public transit. The city currently has the fourth-largest tram network in the world.

To date, Bombardier has received orders for more than 1,500 of its FLEXITY trams.