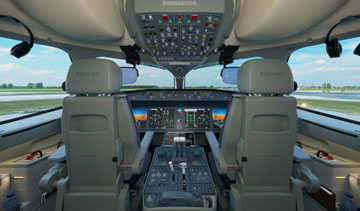 Bombardier’s CSeries commercial jet is expected to compete with some of the smaller planes made by Boeing and Airbus. PHOTO Bombardier

MONTREAL—Bombardier has teamed up with engine maker and aerospace technology maker Pratt & Whitney to develop and implement a data management service for the CSeries aircraft.

The technology will be part of the overall Bombardier Aircraft Health Management System (AHMS) capable of transmitting real-time and recorded data from the aircraft.

The AHMS will facilitate remote troubleshooting and deliver efficient and accurate diagnostics for use by maintenance and flight crews.

Under this agreement, Pratt & Whitney’s eFAST system will be the infrastructure unit used to perform data transmissions from the CSeries aircraft’s on-board Health Management Unit (HMU) to the ground. Along with Bombardier, they will make up the data acquisition structure which will automatically download, process and store data that will be available for upload to respective customer portals.

No financial details were released