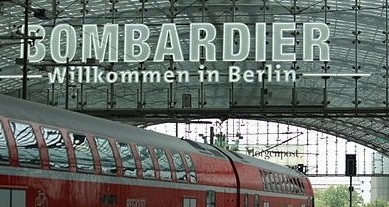 The joint venture’s high speed trains are capable of traveling at 380 kilometers per hour and will be an integral part of China’s high speed rail network, the company said. PHOTO: By Geogast, via Wikimedia Commons

The contract for 15 eight-car trains is valued at approximately 2.4 billion Chinese RMBs or US$381 million.

“China now has the world’s longest operational track mileage and largest number of high speed trains. This market represents a tremendous opportunity where we have been successful by offering innovative and highly reliable products,” Jianwei Zhang, president of Bombardier China, said.

“Bombardier is very proud to be involved in China’s new high speed railway age by delivering leading edge, very high speed rail equipment through Chinese joint venture expertise and resources. We are confident to deliver more next-generation rail equipment with the most advanced rail technology for China from within China,” he added.

Bombardier owns 50 per cent Bombardier Sifang along with its partner, CSR Sifang Rolling Stock Co. The joint venture started delivering its newest generation of high speed train in the first quarter of 2015.

“This early follow on order shows the confidence of China Railways in BST’s leading high tech product,” the company said.

The new trains have a maximum operating speed of 380 kilometres per hour and will be an integral part of China’s evolving high speed rail capability, the company said. The trains will consist of eight aluminum carbody cars and will equipped with VIP seats, first class seats, second class seats and a dining car.

The trainsets will be manufactured at the joint venture’s production facilities in Qingdao, China.