Canadian plane maker tried to deflect queries about a possible CS500, saying it's premature to talk about a larger aircraft after just four CSeries planes have been delivered 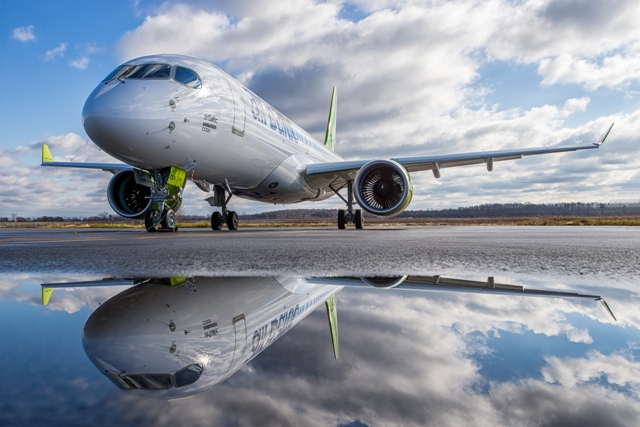 The US$85.7-million plane is designed to carry between 130 and 150 passengers. PHOTO: Bombardier

MIRABEL, Que.—Bombardier could barely get the largest aircraft it’s ever made out the door without avoiding questions about an even larger plane on the horizon.

The Montreal-based company said it constantly gets asked by CSeries customers about plans for a CS500 to join its family of CS100 and CS300 commercial jets, which can seat up to 135 and 160 passengers, respectively.

“The industry always is looking for the next derivative and so we get the question quite a bit,” Fred Cromer, president of Bombardier Commercial Aircraft, told reporters Monday at a ceremony handing over the first CS300 to Air Baltic.

He said the focus for the company right now is to overcome delays caused by engine delivery issues at Pratt & Whitney and ramp-up production in 2017 of the existing CSeries planes.

Air Baltic CEO Martin Gauss said he’s open to an even larger CSeries once it receives deliveries of 20 CS300s.

“We are very happy with the CS300 and then if Bombardier does something more then we are very happy to have a discussion,” he told reporters in a hangar in front of its new plane.

The first CSeries CS300 was handed over to the Latvian carrier Monday at the aerospace manufacturer’s plant at Mirabel airport north of Montreal.

The US$85.7-million plane will make its maiden commercial flight Dec. 14 between Riga and Amsterdam.

Bombardier CEO Alain Bellemare said it’s premature to talk about an even larger aircraft after just four planes have been delivered and the company is four years away from breaking even on the planes.

However, he said that the company’s request for US$1 billion of federal funding could help it with its next aircraft development project.

“We’re at the stage right now where we’re starting to think about where do we invest next and in which platform do we invest next, so that is the type of discussions we’re having with the federal government right now,” he said, refusing to provide details of the company’s request.

He said national aerospace companies around the world, including the U.S., Europe, China and Japan, receive government financial support.

Bellemare described Quebec’s US$1-billion investment in the CSeries as instrumental for the delayed and over cost US$5.4-billion aircraft program.

Despite the funding, he said the company continues to optimize its cost structure to be more competitive. It’s in the midst of a second round of job cuts that will eliminate 7,500 aerospace and transportation jobs around the world through 2018.

Bombardier is ending a challenging year in which it completed and delivered two new aircraft models and is testing a large business jet.

The company has received 360 firm CSeries orders, which includes 235 for the CS300.