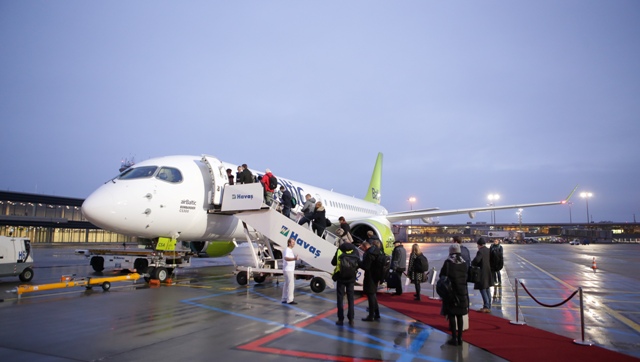 MONTREAL—Bombardier Inc. says it expects to achieve solid growth in 2017 thanks in large part to previously announced restructuring plans.

In its 2017 guidance released Dec. 14, the Montreal-based transportation giant said it expects earnings before interest and tax in the range of $530 million to $630 million, which represents a year-over-year improvement of about 50 per cent at the mid-point of the range.

The company said it also expects to spend $250 million-$300 million on restructuring to further improve efficiency and reduce costs.

Bombardier said its consolidated revenue in 2017 is expected to grow by low single digits, driven by growth in the rail business and the ramp up of the CSeries aircraft program, and its cash flow usage to be in the range of $750 million to $1 billion.

The company’s first CS100 entered service in Switzerland earlier this year, while its first CS300 took its first commercial flight this week with Latvian carrier airBaltic. With both CSeries models now in service, Bombardier has even floated the possibility of a larger CS500.

“Our turnaround plan is in full motion and the early benefits can be seen in our 2016 results,” said company president and CEO Alain Bellemare.

“We’ve set a strong foundation for growth, and our focus in 2017 will be on unleashing the value of our portfolio and creating shareholder value through solid execution.”

Bombardier will further discuss its 2017 guidance on Thursday during its Investor Day in New York.

Prior to issuing its guidance, the company’s shares dipped almost 1.5 per cent in Toronto to close at $1.91.