The U.S. plane maker will invest $20 million in the new facility as it moves more component manufacturing in-house 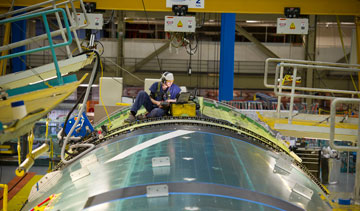 LONDON—Boeing Co. is betting on the U.K. for its first European factory.

The U.S. plane maker announced it will invest 20 million pounds (approximately C$32.5 million) in a new Sheffield, U.K. facility late last week, signalling that it is confident in the country despite ongoing Brexit negotiations and the U.K.’s impending departure from the EU trade bloc.

“The U.K. provides Boeing with the talent and infrastructure we need to grow and maintain a high level of productivity and quality to meet our significant order book,” said Michael Arthur, president of Boeing Europe and managing director of Boeing U.K. and Ireland.

“Our decision to start manufacturing high-value components in the U.K. is a step-change in our engagement and a further example of Boeing’s commitment to grow here, supporting the U.K.’s long-term prosperity,” he added.

Boeing currently employs more 2,000 in the U.K. in sales, training and other roles, but none in manufacturing.

The new plant will produce actuation systems for Boeing’s 737, 737 Max and 777 programs and is part of a company push to shift more component manufacturing in-house.

As part of the same initiative, another Boeing plant in Portland, Ore. will also begin making the actuators, which are used to extend and retract wing flaps during flight.

Boeing did not release a completion date for the project, but said it expects to begin recruiting employees for the plant as early as next year.