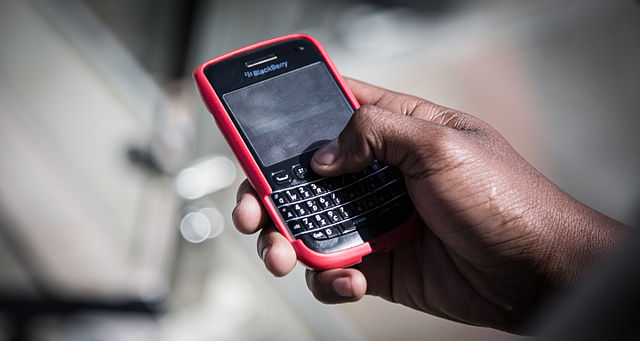 Building a foundation on innovation and smartphone development, the company has struggled to adapt to changing consumer wants. PHOTO: Omaranabulsi, vie Wikimedia Commons

WATERLOO, Ont.—BlackBerry says it plans to end all internal hardware development—signalling a strategic shift for a company that built its reputation on innovative smartphone technology created at its base in Waterloo, Ont.

The hardware development work will be outsourced to BlackBerry’s partners.

“We are reaching an inflection point with our strategy,” BlackBerry chairman and CEO John Chen said in a statement.

“The company plans to end all internal hardware development and will outsource that function to partners. This allows us to reduce capital requirements and enhance return on invested capital.”

The move is part of Chen’s efforts to turn around the company, once a highly profitable global leader in smartphone technology that has been displaced by products from Apple, Samsung and others.

The company’s stock rose slightly in pre-market trading after the announcement. BlackBerry stock traded at US$8.18 per share about 90 minutes before regular trading began, up about four per cent from Tuesday’s close at Nasdaq.

BlackBerry, which reports its results in U.S. dollars, says it had a US$372 million net loss in the three months ended Aug. 31, equivalent to 71 cents per share, but broke even after excluding certain items.

Revenue was $334 million or $352 million after adjustments that was below analyst estimates of $391.75 million.

Chen had said at the previous quarterly earnings release that he expected the company’s mobility solutions segment, which includes hardware and a mobility software licensing service, to break even or record a slight profit in this financial year.

In his statement Sept. 28, Chen said the company’s mobility solutions strategy is “showing signs of momentum, including our first major device software licensing agreement with a telecom joint venture in Indonesia.”