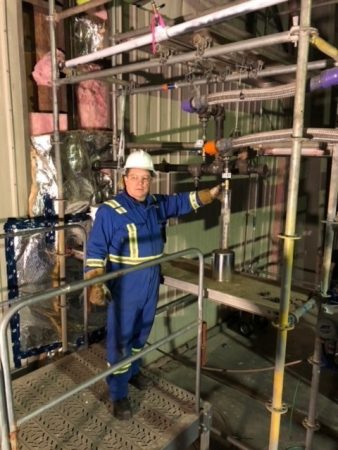 “This innovative Diluent Recovery process — developed over years of research, testing and demonstrations — separates diluent that has been traditionally used to blend with the molasses-like heavy oil which has enabled it to be transported through Canada’s network of pipelines. After we remove this diluent, the bitumen can be poured into modified rail containers where it cools down and becomes a semi-solid,” explained Cal Broder, Founder and Chairman of BitCrude Energy. The diluent separated from the bitumen can then be recycled back to the oilsands companies.

BitCrude’s™ latest demonstration project was the next step in proving the effectiveness of the BitCrude™ Transportation Process. In September 2019, the company successfully shipped in one modified container, the equivalent of 150 barrels of 7.6 API bitumen from an oilsands operator to Asia.

The modified intermodal container vessel, similar in design and security to existing units used for dry goods, is transported on flatbed rail cars from Alberta to ocean tankers for international markets. Unit trains consisting of 100 – 160 flatbed cars can transport between 52,500 and 84,000 barrels. Trans-oceanic container ships can transport between 500 to 15,000 containers, which would be the equivalent of 87,500 to 2 million barrels of bitumen.

“The Government of Alberta has been monitoring BitCrude’s progress on its innovative bitumen transportation process, which will enhance market access opportunities for Alberta. We applaud this expression of Alberta’s entrepreneurial spirit and look forward to continued success as the BitCrude team moves into further commercial development of their product,” said Alberta Energy Minister Sonya Savage.

“In addition to sparking interest from Canadian bitumen oil producers, we are negotiating international supply agreements with refineries in four countries eager to purchase Canadian product, including one that has already provided a preliminary letter of interest for up to 120,000 barrels per day,” added Mr. Popko.