With billions in new fiscal room, feds choose investments over return to balance 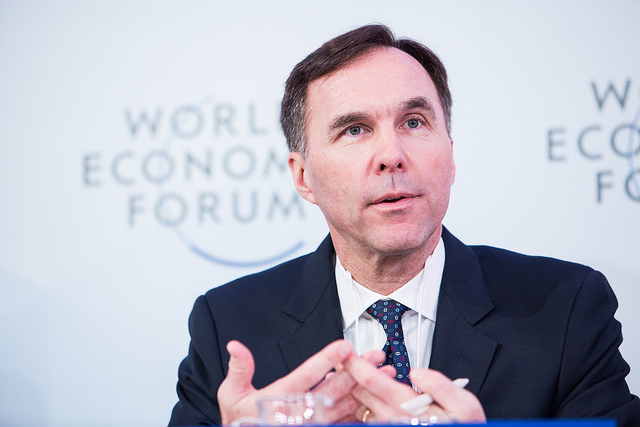 OTTAWA—The Trudeau government tabled a budget Feb. 27 that will use billions of dollars worth of fresh fiscal runway for new investments, a decision that leaves Ottawa with no timetable for balanced books anywhere on its horizon.

In releasing his third fiscal plan, Morneau sought to reassure Canadians the new commitments would be carried out in a responsible way, while arguing his earlier investments had already produced encouraging economic results.

“The economy is doing well—remarkably well,” Morneau said in prepared remarks of his budget speech.

“With a strong and growing economy in place, we believe that now is the right time to focus on the deeper challenges that hold our economy—and our people—back.”

Compared to the fall, the government says it has $19.8 billion in additional cash to play with over the next six years—an average of $3.3 billion a year in extra fiscal elbow room.

Related: Highlights from federal budget tabled by Finance Minister Bill MorneauThat money was generated by a number of sources, including the stronger economy, revenues from tax changes for private corporations, lower-than-expected departmental spending and nearly $5 billion in re-profiled infrastructure commitments over the next two years alone.

But due to the new investments, the government will continue posting annual deficits at roughly the same pace.

Morneau’s plan to raise long-term growth is counting on waves of new measures designed to advance fundamental science, nurture the innovative economy and topple many of the barriers preventing women from fully participating in the workforce.

Indeed, one of the predominant themes of the budget is to bring more women into the workforce, which many say will bring big economic benefits.

But it remains to be seen whether the additional investments will be enough to give future generations the economic boost the Liberals have promised.

Some say Ottawa has spent too much, because the government may have to eventually address another economic downturn or potential fallout from the trade and competitiveness uncertainty connected to the United States.

Others argue Morneau should be spending far more if he truly wants to increase growth. For example, some said the budget’s lack of a comprehensive child-care plan means Ottawa hasn’t gone far enough to ensure the economy reaps the benefits of higher female participation in the workforce.

The government is projecting deficits roughly in line with its October projections. The new outlook now shows an $18.1-billion shortfall for 2018-19 that’s expected to gradually shrink to $12.3 billion in 2022-23, including annual $3-billion cushions to offset risks.

During the 2015 campaign, the Liberals had pledged to keep annual deficits at no more than $10 billion and to balance the books by 2019.

On Tuesday, Morneau reiterated that he’s instead focused on another fiscal “anchor” of lowering the net debt-to-GDP ratio—a measure of Ottawa’s debt burden—each year. The budget predicts the ratio to decline each year over the outlook.

The lack of target date for a balanced budget drew swift criticism Tuesday—from some economists and from the opposition Conservatives. There are concerns over Ottawa’s deficit plan at a time of economic expansion and warnings it could find itself far deeper down the deficit hole in the event of a recession.

Other major worries are linked to the unknowns surrounding the outcome of the NAFTA renegotiation and the potentially greater fallout from the U.S. plan to slash corporate tax changes.

Many have urged Morneau to respond by cutting business taxes in Canada—but he has refused to act until the U.S. government irons out the details of its tax overhaul. The budget acknowledged the uncertainty and said more analysis was necessary.

The government will do its homework on the U.S. tax plan before taking any steps to address it, Morneau told a news conference before the budget was introduced.

“It’s not news to me that business is asking for lower tax rates—I was in business, that’s a pretty common refrain,” Morneau said.

Dennis Darby, president and CEO of the Canadian Manufacturers & Exporters, said the budget was a “missed opportunity” because it lacked reforms needed to improve competitiveness and encourage investment. He added that changes were missing long before the U.S. tax changes emerged and they’ve only exacerbated the situation.

Jean-Francois Perrault, chief economist for Scotiabank, said the government’s plans to focus new spending in the budget on important, long-term goals to address inequality also raise the question of whether it still has room to navigate rough economic waters in the future.

“If you do things that reduce inequality, depending on how you do them, there is a growth payoff,” Perrault said.

For example, he said the budget introduces lots of smaller steps towards raising workforce participation among women—but it lacks a broader child-care plan. For Perrault, child care is the single most important measure that encourages women to enter the workforce.

The Liberals provided money in last year’s budget for child care, but many called it insufficient.

She said in other jurisdictions government-subsidized child care has proven it pays for itself by enabling more women to enter the workforce, thus raising revenues.

Yalnizyan also argues that in its effort to keep the debt-to-GDP on a downward track, the Liberals are actually spending less over the outlook when the promised investments are compared to revenues. To explain it, she noted how the government moved forward nearly $5 billion in past infrastructure commitments to the next two years.

She said as long as there’s no unexpected downturn, the government appears to keeping its fiscal powder dry this year, so it can put more into the 2019 budget—which will be tabled months before the next election.

“But that does not square with their focus on saying we need to plan for the long-run growth of the economy,” Yalnizyan said.