Protect motors from mechanical shock and stress during start-ups 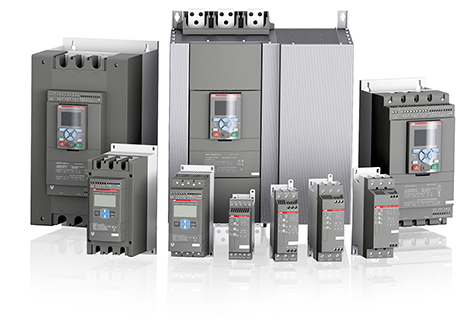 In electric motor applications, it is important to avoid situations that create unnecessary wear and tear on the motor and driven machinery as this can result in reduced service life, significant replacement and maintenance costs, as well as loss of productivity.

One of the most critical parts of the operation is at start-up, where a variety of factors combine to dramatically increase the stress not just on the motor but also the infrastructure that it is connected to. However, by utilizing a soft starter, this stress can be almost completely avoided.

When full power is supplied to an AC induction motor at standstill, the motor can draw an initial current of more than 7 times the normal load current, before dropping back down as it approaches full speed. During this time, the motor and electrical system experience abnormally high currents, which result in potentially damaging heat stress. It also creates a requirement for oversized cables and components, and may incur significant extra costs from electricity supply companies who determine rates according to peak current demand.

Additionally, with full power applied, the motor will attempt to accelerate very quickly, producing up to 3 times the normal load torque. Especially with large, powerful motors, this can cause mechanical shock to the motor, drivetrain, and the driven load, with potential consequences including:

To deal with these problems, it is recommended to install a soft starter that gradually increases the voltage supplied to a motor when it is started, preventing the current and torque from building up too quickly. In a typical AC induction motor, the current drawn by the motor is proportional to the square of the supply voltage, and the torque is proportional to the current. This means that ramping up the voltage slowly results in a smooth build-up of current and torque in the motor.

In the common configuration, a soft starter consists of two thyristors – or SCRs as they are commonly known – connected back-to-back for each phase, which work together to control the voltage supplied to the motor. Because AC voltage is rapidly changing between positive and negative at the line frequency, the supply voltage can be controlled by switching the power on and off during specific parts of the AC voltage waveform. Thyristors operate like electrical switches, making them ideal for this task.

Soft starters include a logic controller that determines the timing of power supply to the motor, and this can be open loop or closed loop. Open loop devices do not have a feedback system – they do not modify their output based on the behaviour of the motor, instead ramping up the voltage according to a pre-selected set of values. Closed-loop devices monitor the current build-up in the motor with a feedback loop, allowing them to closely manage the start-up of the motor for maximum efficiency.

A Variable Frequency Drive (VFD) is a device which controls the speed of a motor by modifying the frequency of the AC supply power. While used primarily for precision speed control, a VFD can also sometimes be used as a soft starter, and is best suited for applications where the acceleration characteristics must be highly consistent even with variable loads. However, VFDs have some downsides, being relatively expensive and requiring management of potential bearing currents.

When using soft starters, however, the load on the motor impacts how fast it will accelerate. If the main concern is simply to limit the current surge in the motor rather than achieve a precise acceleration time, a soft starter is often a much more cost-effective choice, especially in large, high-power applications.

The initial voltage supplied by a soft starter has a significant impact on how effective it is. Especially when connected to a high-inertia load, a motor may require a substantial amount of torque to begin rotating. When insufficient power is supplied to create rotation, heat builds in the windings and quickly reaches damaging levels. Therefore, it is important to choose an initial voltage that is high enough to get the motor rotating straight away – ideally within 1-2 seconds of energization.

The ramp time is how long the soft starter takes to go from starting voltage to full line voltage. A longer ramp time reduces the torque in the motor during start-up, resulting in a slower, smoother acceleration, and is common for applications such as water pumps and conveyors where the infrastructure that the motor is connected to is at greater risk from mechanical shock.

For applications where the load on the motor during start-up varies considerably, it is recommended to use a soft starter that monitors the current in the motor to prevent excessive current surges in the system when the load is high.

Applying full power to a motor at start-up often results in mechanical and electrodynamic stress on the motor, electrical system, and connected machinery that reduces service life and increases costs. By utilizing a soft starter, this problem can be avoided, maximizing the productivity and operational efficiency of the application.

This article was submitted by eMotors, an online source for electric motors, gear reducers and controls in Canada. eMotors Direct carries a full line up of electronic soft starters in 30 warehouses across Canada, including such popular brands as ABB, WEG and Motortronics.