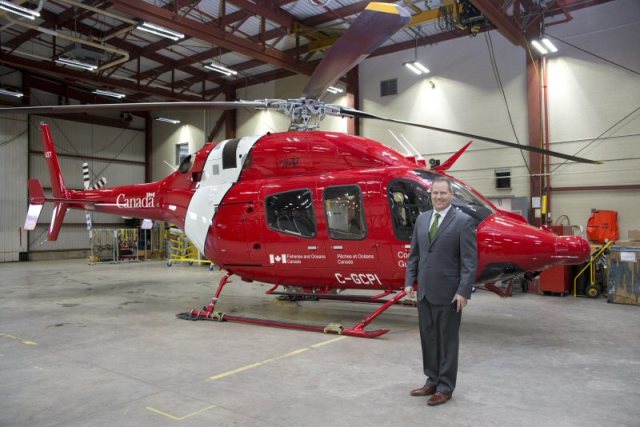 MP Darren Fisher on hand at the Canadian Coast Guard hanger where the last of the new light-lift helicopters was delivered. PHOTO: Fisheries and Oceans Canada

The Mirabel, Que.-based company delivered the aircraft ahead of schedule and on budget after receiving the $172 million order in May of 2014.

“These made-in-Canada light-lift helicopters are faster, safer, more reliable and more efficient than the models they are replacing,” Hunter Tootoo, Canada’s minister of Fisheries, Oceans and the Canadian Coast Guard, said. “By renewing the fleet of helicopters, our government is providing the women and men of the Coast Guard with the modern equipment they need to better serve Canadians.”

12 of the 15 new flyers are already in service carrying out Coast Guard missions across the country, while the remaining three aircraft are supporting pilot training exercises and are scheduled to be deployed to operational bases shortly.

Bell 429s, the helicopters are capable of flying farther and carrying a greater payload than the aircraft their predecessors. In addition to safety and national security missions, the helicopters will perform pollution response and ice-monitoring duties, among others.