DETROIT—The top executive of General Motors apologized for deaths linked to the delayed recall of 1.6 million small cars, saying the company took too long to tell owners to bring the cars in for repairs.

Faced with a crisis just months into the job, CEO Mary Barra has put herself front and centre in the company’s efforts to take responsibility for mishandling a defect with ignition switches in small cars, and to ward off a threat to its sales and reputation. She named a new head of global safety, one day after telling employees that GM is pushing to resolve safety issues more quickly.

Barra stopped short of saying the company would compensate families of those killed in crashes caused by faulty ignition switches. But she said GM would do what’s right for customers after it completes an internal investigation, which she expects to take about seven months to finish.

“I am very sorry for the loss of life that occurred, and we will take every step to make sure this never happens again,” she said. 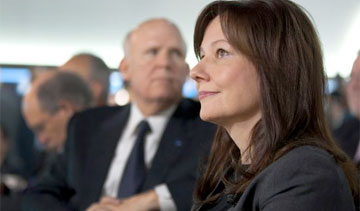 Barra is trying to distance the GM she now runs from the pre-bankruptcy company that buried the problem in bureaucracy. The company has acknowledged it learned about the problem switches at least 11 years ago, yet it failed to recall the cars until last month. Barra is likely to testify next month before two Congressional committees investigating the recall. There, she’s sure to face questions about what went wrong at the old GM.

The Justice Department also is investigating whether any laws were broken in the way GM handled the recall.

Barra, who became CEO on Jan. 15, said Tuesday that she found out about the switch problem in late December and had no knowledge of it before that.

David Cole, the former head of the Center for Automotive Research in Ann Arbor, Mich., and the son of a former GM president, said it was the first time in his memory that a GM CEO has apologized for a safety problem. But the magnitude of the recall is also very rare, he said.

“I think Mary will be extremely forthright. She won’t be blowing smoke at anybody. That’s not her style,” he said. “I think she is doing exactly the right thing.”

GM has to protect its safety reputation to keep sales from falling and profits from slipping. The company has been profitable for 16 straight quarters since emerging from bankruptcy protection in 2009.

Before the meeting with reporters, GM named a veteran company engineer, Jeff Boyer, as its new safety chief, placing a single person in charge of recalls and other safety issues.