EU and U.S. will hold off on "new tariffs." Trump said the EU had agreed to buy "a lot of soybeans"

July 26, 2018  by Ken Thomas And Paul Wiseman, The Associated Press 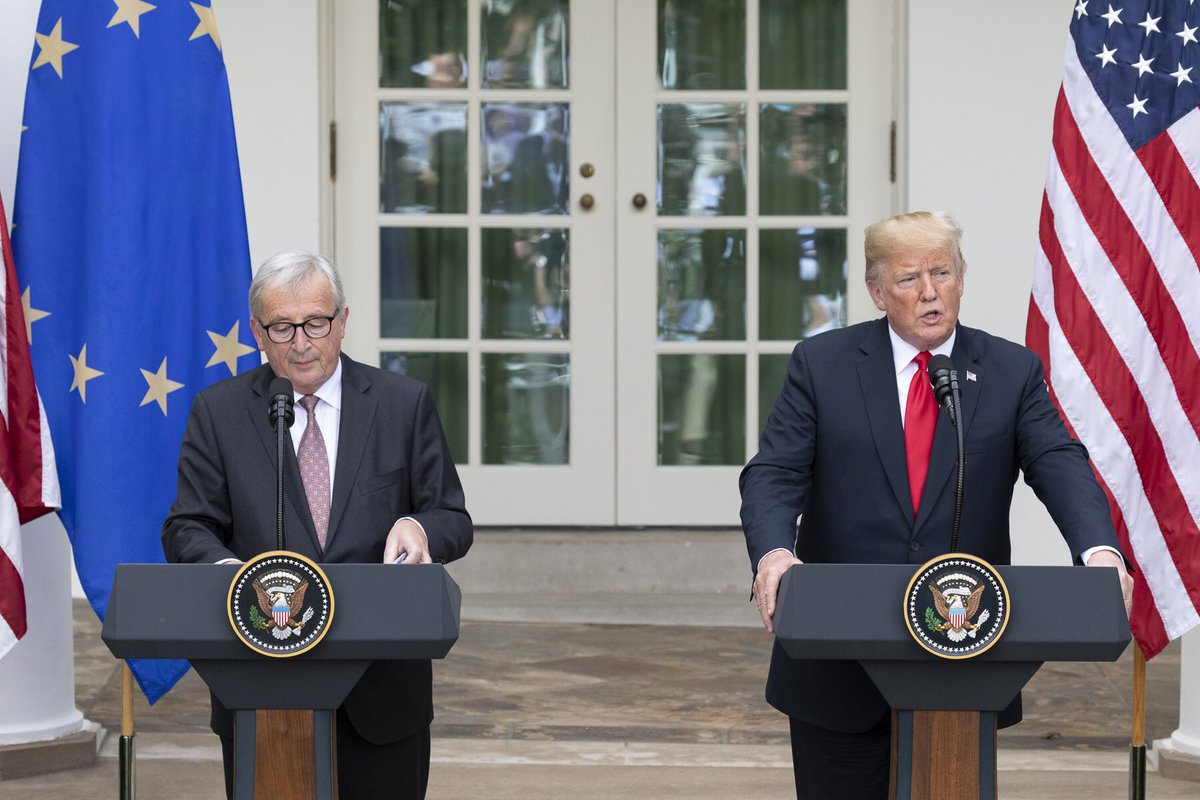 WASHINGTON – President Donald Trump and European leaders pulled back from the brink of a trade war over autos Wednesday and agreed to open talks to tear down trade barriers between the United States and the European Union.

But while politicians and businesses welcomed the deal Thursday, the agreement was vague, the negotiations are sure to be contentious, and the United States remains embroiled in major trade disputes with China and other countries.

In a hastily called Rose Garden appearance with Trump, European Commission President Jean-Claude Juncker said the U.S. and the EU had agreed to hold off on new tariffs, suggesting that the United States will suspend plans to start taxing European auto imports—a move that would have marked a major escalation in trade tensions between the allies.

Trump also said the EU had agreed to buy “a lot of soybeans” and increase its imports of liquefied natural gas from the U.S. And the two agreed to resolve a dispute over U.S. tariffs on steel and aluminum.

Treasury Secretary Steven Mnuchin said Thursday addressing steel and aluminum tariffs and counter tariffs would be covered in the first phase of talks between the U.S. and the EU. He reiterated that no new tariffs would be imposed during the negotiations and if the U.S. concluded an agreement, “there would be no car tariffs on the EU.”

Trump was travelling to Iowa and Illinois Thursday in which his trade agenda was expected to be a leading issue. The administration recently announced a US$12 billion temporary aid package for farmers—including soybean producers—dealing with the impact of retaliatory tariffs.

“It’s encouraging that they’re talking about freer trade rather than trade barriers and an escalating tariff war,” said Rufus Yerxa, president of the National Foreign Trade Council and a former U.S. trade official. But he said reaching a detailed trade agreement with the EU would likely prove difficult.

The tone was friendlier than it has been. During a recent European trip, Trump referred to the EU as a “foe, what they do to us in trade.” The EU’s Juncker said in March, after Trump imposed tariffs on steel and aluminum imports, that “this is basically a stupid process, the fact that we have to do this. But we have to do it. We can also do stupid.”

On Wednesday, Trump and Juncker said they have agreed to work toward “zero tariffs” and “zero subsidies” on non-automotive goods.

Trump told reporters it was a “very big day for free and fair trade” and later tweeted a photo of himself and Juncker in an embrace, with Juncker kissing his cheek.

The agreement was welcomed by political and business leaders in Germany, the EU’s biggest economy, though their relief was tempered with caution that details have to be firmed up.

“Very demanding and intensive negotiations lie ahead of us,” German Economy Minister Peter Altmaier said, vowing that “we will represent and defend our European interests just as emphatically as the U.S. does with its interests.” He said the Trump-Juncker accord was “a good start—it takes away many people’s worries that the global economy could suffer serious damage in the coming months from a trade war.”

Trump campaigned on a vow to get tough on trading partners he accuses of taking advantage of bad trade deals to run up huge trade surpluses with the U.S.

He has slapped taxes on imported steel and aluminum, saying they pose a threat to U.S. national security. The U.S. and EU are now working to resolve their differences over steel and aluminum—but the tariffs are still in place. And they would continue to hit U.S. trading partners like Canada, Mexico and Japan even if the U.S. and the EU cut a deal.

Whatever progress was achieved Wednesday could provide some relief for U.S. automakers. The escalating trade war and tariffs on steel and aluminum had put pressure on auto companies’ earnings. General Motors slashed its outlook, and shares of Ford Motor Co. and auto parts companies have fallen.

“Our biggest exposure, our biggest unmitigated exposure, is really steel and aluminum when you look at all of the commodities,” GM CEO Mary Barra said Wednesday.

Trump has also imposed tariffs on $34 billion of Chinese imports—a figure he has threatened to raise to US$500 billion—in a dispute over Beijing’s aggressive drive to supplant U.S. technological dominance.

China has counterpunched with tariffs on American products, including soybeans and pork‐a shot at Trump supporters in the U.S. heartland.

The EU is stepping in to ease some of U.S. farmers’ pain. Juncker said the EU “can import more soybeans from the U.S., and it will be done.”

Mary Lovely, a Syracuse University economist who studies trade, said, “The Chinese are not going to be buying our soybeans, so almost by musical chairs our soybeans are going to Europe.” The trouble is, China last year imported $12.3 billion in U.S. soybeans, the EU just $1.6 billion.

Trump’s announcement stunned lawmakers who arrived at the White House ready to unload concerns over the administration’s trade policies only to be quickly ushered into Rose Garden for what the chairman of the Senate Agriculture Committee called “quite a startling” development.

“I think everybody sort of changed what they were going to say,” said Sen. Pat Roberts, R-Kan.