Dynamic Attractions has leveraged its expertise in steel fabrication and the precision-engineering of high-end telescopes to work alongside Disney, Universal Studios and other theme parks 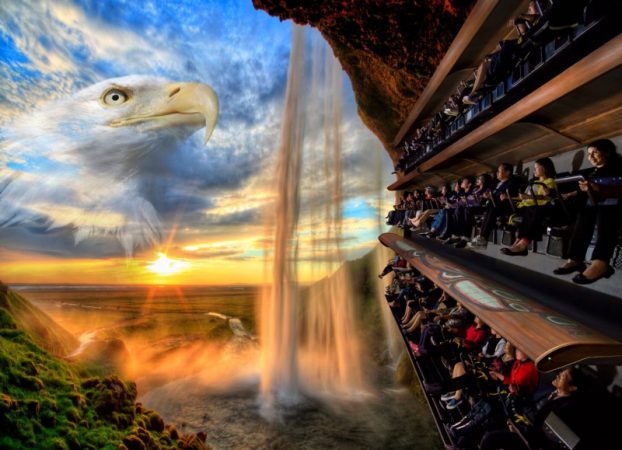 PORT COQUITLAM, B.C.—Every day, thousands of thrill seekers around the globe strap themselves into amusement park rides and are taken on a multimedia adventure, whether coming face to face with a fire-breathing dragon, flying on a wizard’s broomstick or perhaps soaring over the wonders of the world.

The technology that makes many these experiences possible can be traced back to a company headquartered in suburban Vancouver, little known outside the industry, that is quickly making a name for itself as a premier builder of some of the most popular and sophisticated rides on the planet.

Since 2011, Dynamic has leveraged its longtime expertise in steel fabrication and the precision-engineering of high-end telescopes to work alongside Disney, Universal Studios and other theme park owners to create everything from the Harry Potter rides to the popular flying theatres.

Kelven Tan, vice-president of business development in Asia, said what sets Dynamic Attractions apart is not only the technology but its expertise in immersive, media-based attractions, along with the focus it places on storytelling.

“The rides are only the means to an end,” Tan said, speaking at the company’s base in Port Coquitlam.

“Whether it’s a tilt and drop, whether it’s a spin cycle or a gyro table, it’s just to create the effect,” he added. “It has turned the science of rides into an art.”

Dynamic’s facilities are a hive of activity. The grounds include steel fabrication shops and several custom-built hangers, one of which houses a section of roller-coaster track that pivots up and down atop a five-storey triangular structure. It’s called a tilt-and-drop and resembles a futuristic version of a medieval catapult.

The company has changed dramatically since its inception as a steel fabricator 90 years ago.

Dynamic was established in Vancouver in 1926, but by the late 20th century it had carved out a niche in high-precision engineering for products such as telescopes.

In the late 20th century, the company got a foothold in the amusement park market when a former collaborator who had gone on to work for Disney reached out for help troubleshooting one of its attractions.

Fast forward to today and the company has more than 50 rides operating around the world and many more in the works.

Dynamic is in the process of creating media-based attractions for the inaugural 20th Century Fox World in Malaysia, for Ferrari World in the United Arab Emirates and for an outer space-themed amusement park in Hangzhou, China.

Guy Nelson, Dynamic’s president and CEO, bought the company in 2007 and oversaw its transition to designing theme park attractions. The company’s background with telescopes made the switch a logical one, he said.

“We have a skill set that’s second to none in the area of moving large pieces of steel safely and to precision tolerances, like you would expect of a telescope on top of a mountain,” Nelson said.

“Those skill sets transcend and actually are applicable in the ride-system business where precision and safety and quality are very important.”

In 2010, Dynamic’s annual revenue from media-based attractions amounted to about $20 million. By 2015 that number had more than quintupled, to over $100 million.

Earlier this year, the company opened a facility in Orlando, Fla., dedicated to designing attractions.

Looking to the future, the company sees itself pivoting toward Asia, noting that theme park visits in the Far East are expected to overtake those in North America within two years.

Nelson described one of his favourite rides as Soaring Over the Horizon at Shanghai Disneyland, which takes visitors on a scenic flight around the globe.

“People are coming off of that flying theatre … screaming with delight, eight- to 80-year-olds, with memories that they’ll have forever,” he said.

“What we want to accomplish is absolutely the same thing, only more of it.”