The case, brought before B.C.'s Court of Appeal, is unlikely to be wrapped up before Kinder Morgan Canada's May 31 deadline for getting assurance the Trans Mountain pipeline expansion can proceed 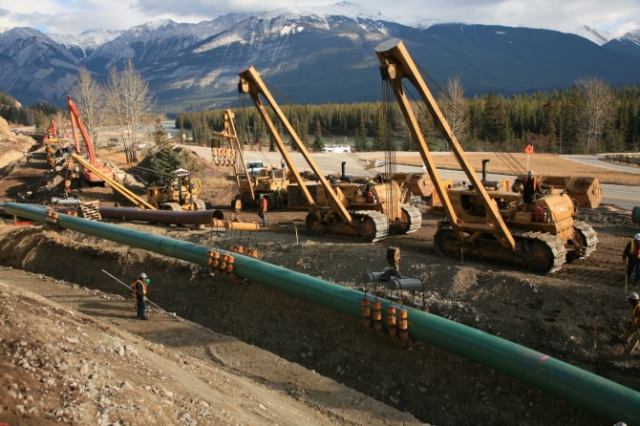 VICTORIA—British Columbia’s fight against the Trans Mountain pipeline expansion is heading to court with the New Democrat government seeking affirmation that it has the right to protect its environment from the threat of a heavy oil spill.

The reference case to B.C.’s Court of Appeal throws further uncertainty on the project as cabinet ministers said Thursday it is unlikely a decision will be reached before Kinder Morgan Canada’s May 31 deadline for getting some assurance it can proceed without the threat of more delays.

Premier John Horgan said the reference case is aimed at protecting the province’s coastline and economy from the harms of an oil spill.

“By issuing this reference today we’re confirming we have the jurisdiction to ensure that if there was a catastrophic diluted bitumen spill we have the ability to take steps to protect our economy and our environment,” Horgan said.

It’s the latest move in the escalating dispute over the $7.4-billion project that would double an existing pipeline from Edmonton to Burnaby, B.C., in an effort to sell more fuel to Asian markets.

Kinder Morgan said it wants clarity on its ability to build in B.C. and the protection of its shareholders.

“The comments and proposed legislation put forward by the province of B.C. today signal the province’s continued intention to frustrate the project,” the company said in a statement on Thursday.

The Canadian Association of Petroleum Producers calls the move discriminatory and redundant and “just another stall tactic to tie the project up with more red tape after Ottawa gave in the green light 18 months ago.”

The group said in a news release that the government of Canada now needs to exercise its Constitutional authority and move the project forward.

“The process counts, the rules count,” said Chris Gardner, president of B.C.’s Independent Contractors and Businesses Association. “Premier Horgan is saying it doesn’t count. That’s wrong and that’s not how we do business in Canada.”

B.C. Attorney General David Eby said he could not put a timeline on any decision for the reference case, which could be appealed to the Supreme Court of Canada.

Kinder Morgan has curtailed spending on the project, blaming B.C. for the decision as it set the May 31 date for getting some guarantees it can proceed without disruptions.

Prime Minister Justin Trudeau has repeatedly vowed that the project will go ahead.

“The powers that they (B.C.) are seeking through this court reference are a recipe for economic gridlock,” she said.

Notley said she has difficulty understanding why B.C. wants the courts to rule on new shipments of diluted bitumen that would be sent through the expanded pipeline but has no concerns about a piece of infrastructure that has been in place for 60 years.

“It makes no sense,” Notley told reporters on a conference call from Slave Lake, Alta.

Alberta has retaliated to B.C.’s position, even banning wine imports from its neighbour at one point. It has also threatened to slow the flow of oil and natural gas to B.C.

Saskatchewan Premier Scott Moe said his province has yet to determine if it will seek intervener status in the case, but he called on the federal government to assert its jurisdiction over the project that Ottawa approved in 2016.

“We’ll see where all this goes,” he said.

Federal Environment Minister Catherine McKenna said she is willing to address some of B.C.’s environmental concerns, but added that Ottawa has already taken steps to mitigate damage in the event of a spill, including increased capacity to tow ships and creating five new emergency response stations.

McKenna released a letter that said the federal government will consider forming a joint scientific advisory panel with B.C. to take stock of the research available on oil spills, including current models of how to respond in the event of an incident involving a number of different petroleum products.

B.C.’s Environment Minister George Heyman said B.C. has been meeting for months with federal officials on spill prevention issues and the province has already invited Ottawa to participate in a science panel on bitumen in the environment.

In addition to asking the court to review proposed amendments to the Environmental Management Act that would give the province the authority to regulate the impacts of heavy oils, the province will also ask if federal legislation would override its changes to the law, he said.

Eby said the reference case does not apply to oil tanker traffic, which the provincial government has said will increase seven-fold if the pipeline expansion is completed.

“Ships were excluded for a couple of reasons, one was practicality, the other is simply it appears to be an area of federal jurisdiction,” he said.

Many environmental groups fear an increase in tanker traffic out of Burnaby along marine routes that are at times extremely narrow, compounds the risk of a major spill.

—With files from Dean Bennett in Edmonton and Ryan McKenna in Regina.