The Chairman says that backlog issues are a major concern for many airlines as far as the shift toward single-aisle aircraft is concerned. 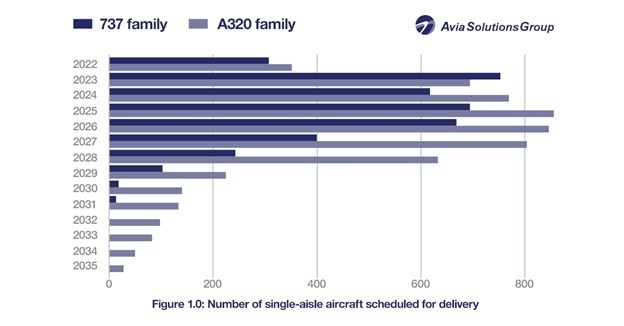 LONDON — According to Avia Solutions Group, available figures have shown that single-aisle aircraft and their variants have become commercially active, leading to a conclusion that these aircraft will likely become a key part and a major player in the narrow body market in the post-Covid recovery period. Single-aisle aircraft typically covers narrow body aircraft such as CRJ, B737, Comac C919 and Airbus A320, A321 Neo series, and A220 variants.

According to the Chairman of Avia Solutions Group, Gediminas Ziemelis, looking at many airlines today, it is apparent that more than 80% of their installed fleet constitutes single-aisle aircraft, ranging from small to middle-sized planes. From their position, they say thee long-term outlook is that the aviation market will likely shift towards narrow-body, with single-aisle aircraft share in the global commercial aviation market increasing to over 56% in the next five years.

The Chairman says that backlog issues are a major concern for many airlines as far as the shift toward single-aisle aircraft is concerned. Based on the available figures, this backlog means that the worldwide fleet of various aircraft variants that fall under the large narrow body category will remain below 40%, but the trend may change favorably in the coming years.

In reference to a statement by Boeing’s management, “the heart of the market is around 180-200 seats.” Conceivably, this statement posits that Boeing’s large single-aisle aircraft may become the new market shapers, given the company’s current positioning with large single-aisles. Remarkably, the number of Max 9 and 10 configurations and high-density Max 8 variants have started to dominate the installed fleet for many airlines, representing a new market trend towards single-aisles.

In all likelihood, the aviation market will note an increased number of A321 Neo variants, high-density A320 Neos making an entry into the narrow body market, pushing the tide further in the post-Covid global aviation industry. However, Airbus’ share in the single-aisle market seems to be growing faster than its US rival, Boeing, which believably owns more aircraft variants in the narrow body category.

The latest figures provided for the two major manufacturers to the end of June indicate that Airbus had delivered over 10,600 of the 17,000 orders made by different airlines for A320 and A220 variants. The A320 has emerged as one of the best-selling and most popular single-aisle aircraft, with its market share surpassing that of Boeing’s 737 Max models.

Market experts have cited the quality of engineering and recent disasters and grounding of the single-aisle Max 737 variants as reasons why Boeing’s share in the narrow body market is trailing Airbus. Recent fleet data indicates that Airbus is struggling with a huge order backlog for single-aisle aircraft in the A320 family, with the current market share clocking at 59%. These figures indicate that the old order is fast changing, with the single-aisle market becoming increasingly attractive for many airlines.

Further, the increased favourability of the A320 series for short-haul destinations has increased their attractiveness in the aviation market, presenting opportunities for airlines to maintain intensive flyer programmes during the post-Covid recovery period. Therefore, these aircraft appear more feasible for airlines seeking to achieve fast rebound rates, unlike Boeing’s single-aisle aircraft that predominantly operate in the long-haul segment.

As seen from the order backlogs that aircraft manufacturers are dealing with now, the value of single-aisle variants in driving growth and helping airlines meet their capacity demands during the post-Covid recovery period is largely indispensable. Given these realities, manufacturers should look into the possibilities of creating “middle of the market” aircraft models and those that offer circular composite fuselage to complement existing single-aisle models.