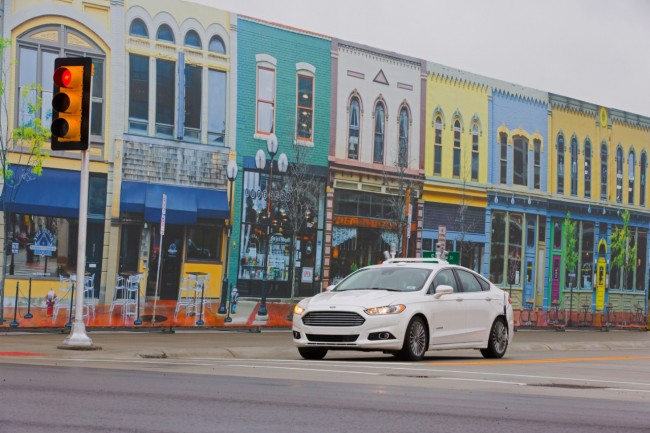 The Fusion Hybrid Autonomous Research Vehicle on the streets of Mcity. PHOTO: Ford

DEARBORN, Mich.—Ford Motor Co.’s Fusion Hybrid Autonomous Research Vehicle has become the first car to begin stalking the streets of a 32-acre mock village at the University of Michigan known as “Mcity.”

Replete with street lights, crosswalks, bike lanes, trees, hydrants, sidewalks, signs, traffic control devices, and even construction barriers, the facility is designed to mimic a real-world urban environment. It was launched earlier this year to test the potential of connected and automated vehicle technologies that will lead to mass-market driverless cars.

“The goal of Mcity is that we get a scaling factor. Every mile driven there can represent 10, 100 or 1,000 miles of on-road driving in terms of our ability to pack in the occurrences of difficult events,” Ryan Eustice, University of Michigan associate professor and principal investigator in Ford’s research collaboration with the university, said. 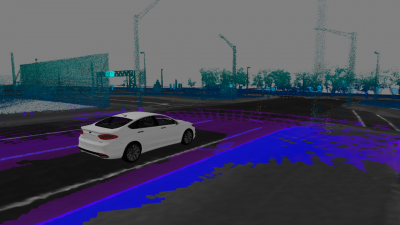 The 3D-mapped street-view the Ford autonomous vehicle sees as it navigates the roadway and identifies obstacles. PHOTO: Ford

Ford has been testing autonomous vehicles for more than 10 years and already offers its customers semi-autonomous technologies. Like many other automakers, however, the company is investigating how to take the next step.

To take this next step, Ford’s research vehicle fuses the driver-assist technologies already available, such as front-facing cameras, radar and ultrasonic sensors, with four LiDAR sensors to generate a real-time 3D map of the vehicle’s surrounding environment, something the company says is “essential” for dynamic performance.

Along with hitting the streets of Mcity, ford has been testing its autonomous fleet at the company’s development facilities in Dearborn and Romeo, Mich., as well as on public roads.

Watch the Ford Fusion Hybrid Research Vehicle on the streets of Mcity: