Ford blames market forces for cancellation of $1.6B Mexico plant, but auto analyst says company may not have changed course if Hillary Clinton won presidency; meanwhile, GM defended itself against Trump tax threats

January 4, 2017  by Dee-Ann Durbin And Tom Krisher, The Associated Press 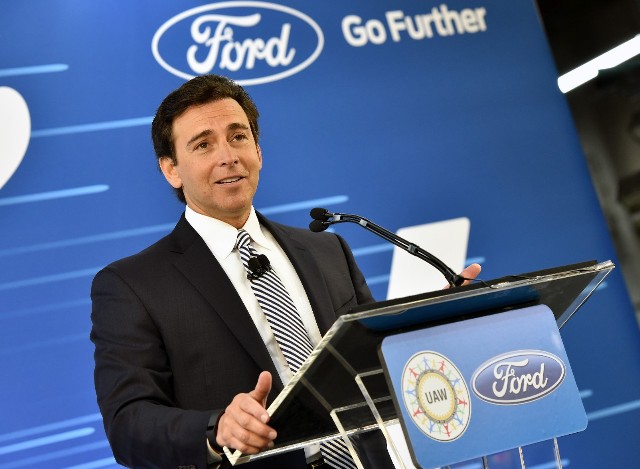 Ford president and CEO Mark Fields announced the cancellation of the Mexico plant and investment in Michigan Jan. 3 in Flat Rock. PHOTO: Ford

FLAT ROCK, Mich.—The auto industry’s relationship with Donald Trump took a dramatic turn Jan. 3 as Ford Motor Co. seemingly bowed to pressure from the President-elect by cancelling plans to build a new $1.6 billion factory in San Luis Potosi, Mexico and General Motors defended itself as Trump threatened the company with a tax on some imported small cars.

Though Ford did not alter plans to move production of the Focus compact to Mexico, mothballing the San Luis Potosi plant will result in a $700 million investment in its Flat Rock, Mich. facility, creating 700 new jobs.

The company’s CEO Mark Fields said Tuesday that market forces dictated Ford’s decision not to build the San Luis Potosi plant. Low gas prices and low interest rates have been hammering small-car sales. U.S. sales of the Focus were down 17 per cent through November; by contrast, sales of Ford’s biggest SUV, the Expedition, were up 46 per cent.

Ford now plans to build the Focus at an existing plant in Hermosillo that makes midsize cars. The company will hire around 200 workers in to expand production there, while its Wayne, Mich. plant, which currently makes the Focus, will get two new products next year, preserving jobs at the facility. The investment in Flat Rock, meanwhile, will support new hybrid, electric and autonomous vehicle programs.

“This is a vote of confidence for President-elect Trump and some of the policies he may be pursuing,” Fields said at the company’s plant in Flat Rock. 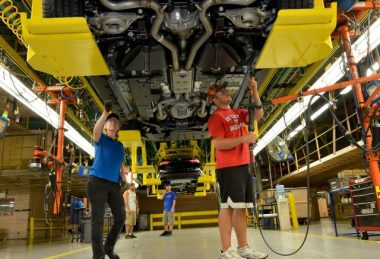 Workers lined up on the factory floor cheered the news. United Auto Workers Vice-President Jimmy Settles, the union’s chief negotiator for Ford, told workers he cried when he heard about the investment. Flat Rock, which employs around 3,200 people, was threatened with closure during the recession. More recently, it has seen temporary layoffs because of slowing sales of one of its products, the Ford Mustang. The plant also makes the Lincoln Continental.

“The jobs created in Mexico have contributed to maintaining manufacturing jobs in the United States which otherwise would have disappeared in the face of Asian competition,” the Mexico Economy Department said.

Fields said Ford will save around $500 million overall by cancelling the San Luis Potosi plant. It expects to get some tax incentives from the state of Michigan.

“If the business case is there to make this decision, and then it can make somebody like Donald Trump look better, OK, go with it,” she said.

Ford might not have changed its plans if Hillary Clinton had been elected, Lindland said. Unlike Trump, Clinton never threatened to tax imports from Mexico.

Trump issued his threat to GM just hours before Ford’s announcement. GM countered that Cruze sedans sold in the U.S. are built in Ohio. Only a small number of Cruze hatchbacks are imported to the U.S. from Mexico.

Fields said he’s not worried about the possibility of tariffs.

“I’m a strong believer that the right policies are going to prevail because we share the same aspirations that I think President-elect Trump does. We want a very strong U.S. economy,” he said.

Among the new vehicles the Flat Rock plant will make is a fully electric SUV that will go 300 miles on a charge. That is due to go on sale in 2020. The plant also will make a hybrid autonomous vehicle that is scheduled to be released in 2021.

Fields said the company is betting that electric and hybrid vehicle offerings will outnumber traditional gas-powered vehicles in 15 years.

Trump may relax government fuel economy standards as part of his initiative to dilute some regulations. But Ford still needs to move headlong into electric and hybrid vehicles because it still has to meet California zero-emission vehicle requirements and comply with emissions standards worldwide, Lindland said.

“All these worlds are colliding to make an announcement like we saw today from Ford possible,” she said.

Ford shares rose nearly 4 per cent to close at $12.59 Tuesday, while GM shares rose less than 1 per cent to $35.15. The Mexican peso weakened against the U.S. dollar after the announcement.