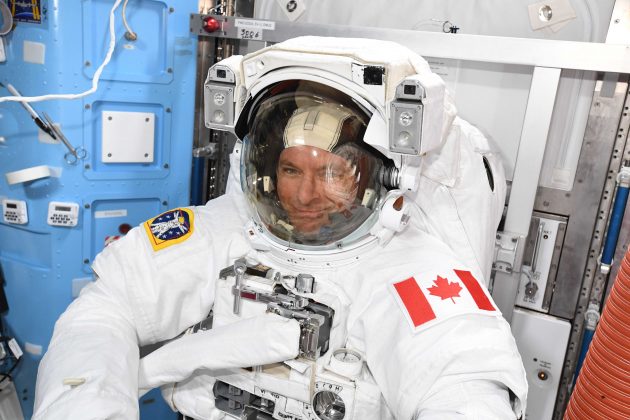 LONGUEUIL, Que. – More than halfway through his almost seven-hour spacewalk, Canadian astronaut David Saint-Jacques’ mission appeared to be going smoothly as he and his U.S. partner Anne McClain completed half the tasks on their list.

Saint-Jacques, 49, joined an exclusive group of Canadian astronauts Monday, becoming just the fourth from this country to take part in such a mission and the first Canadian in 12 years.

Saint-Jacques and NASA’s McClain officially began their spacewalk shortly after 7:30 a.m. EDT according to the U.S. space agency – about half-an-hour ahead of schedule.

Being ahead provides some cushion for the unpredictability of working in space, said retired astronaut Dave Williams, who has spent the most time of any Canadian conducting spacewalks.

“We like to get ahead on the timeline and stay ahead, because you never know what’s going to happen during a spacewalk,” Williams said Monday at the Canadian Space Agency headquarters in suburban Montreal.

Saint-Jacques’ spacewalk comes on his first posting to the International Space Station, which began on Dec. 3. The duo emerged from the station, and the Canadian performed a few brief movements to get used to his suit before diving into the to-do list.

The tasks include relocating a battery adaptor plate, upgrading the station’s wireless communication system and connecting jumper cables along the midpoint of the station’s main truss to give Canadarm2 an alternative power source.

Canadarm2 is a sort of robotic hand that is crucial to maintaining the space station, and the cables would allow the arm to make repairs in case of an outage without requiring a spacewalk.

“All and all, a very busy spacewalk,” Williams said. “They have four major tasks to perform, and David and Anne are going to be all over the space station.”

Williams, who spoke to Saint-Jacques on Saturday, said he was very excited about the mission and spent the weekend going over the tasks with McClain.

Williams holds the Canadian record for the most spacewalks, with three for a total of just under 18 hours outside the space station during a 2007 mission. Williams was also the last Canadian until Saint-Jacques to have performed a spacewalk.

The other two astronauts to have performed the feat are Steve MacLean in 2006 and Chris Hadfield – the first Canadian spacewalker – in 2001.

This is the third spacewalk in just under three weeks for space station occupants, and much of the work involves replacing batteries on the 19-year-old outpost.

Saint-Jacques’ spacewalk wasn’t a given when he arrived at the station, with schedules in flux and a manpower shortage caused by an aborted Soyuz mission last October.

“The primary objective is always to do science, but there’s a lot of work going on there just to maintain the operations of the space station,” said Ken Podwalski, a space agency official.

Canadian Space Agency robotics flight controllers were providing support to the astronauts from mission control in Houston as Saint-Jacques slowly performed the lengthy list of tasks.

Once Saint-Jacques is done the manual tasks that will allow astronauts to replace older batteries near the end of their life with lithium ion batteries, Canada’s other contributions to the station will complete the work.

“Once he’s done, we’ll be able to come down with Canadarm2 and Dextre at the tip and robotically finish moving those batteries around,” Podwalski said.

“David’s doing an incredible job, moving very gracefully, using just fingertip forces to go from one place to another on the space station,” Williams said earlier Monday. “That’s the mark of a highly experienced spacewalker, already.”

Once astronauts are out in space, they don’t return inside until the work is complete, as repressurizing the airlock is a task in itself. Spacewalks are physically demanding.

“What it means is that you basically have nothing to eat in your space suit the whole time you’re outside,” Williams said. “You eat a reasonable breakfast and you have 32 ounces of water and that’s it, whatever the duration of your spacewalk.”

Saint-Jacques arrived at the space station with NASA’s McClain and Oleg Kononenko of the Russian space agency, Roscosmos.