Apparently, Canada has an elevator crisis; one expert blames the manufacturers

With the number of elevators, and calls for high-rise rescues increasing, are cutthroat competition and the four major elevator makers to blame? 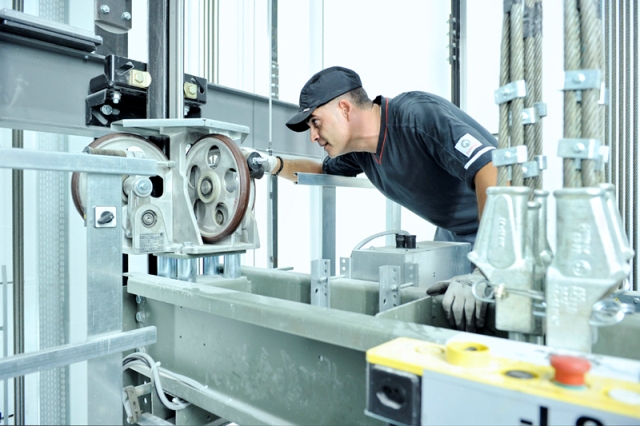 One expert says the big four elevator makers, Otis, Kone, ThyssenKrupp and Schindler have created a race to the bottom in an effort to grab market share. PHOTO: Schindler

TORONTO—Every day of the year, Canadians across the country are finding themselves trapped in faulty elevators, while countless more are suffering through inconvenience and isolation because of elevators that are out of service—and the problem is worsening, an investigation by The Canadian Press has found.

Last year, for example, firefighters in Ontario alone responded to 4,461 calls to extricate people from elevators—more than a dozen a day—and double the number from 2001.

“I don’t think we’re heading toward a crisis, I believe we’re already there,” said Rob Isabelle, a mechanical engineer and elevator consultant to property managers and owners.

“If we look at the reliability of a large number of pieces of equipment, it’s really the worst it’s ever been.”

Among cities, Toronto led the way last year with about 2,862 elevator-rescue calls to 911, but others also had their share of problems. For example, Montreal firefighters responded to 1,532 such calls, Vancouver responders went to 428 calls, while Ottawa saw 314 in 2014.

Insiders say the steep rise in problems is partly the result of more elevators—Ontario has seen a 10 per cent increase over the past five years. But the real culprits, they say, are aging equipment and structural issues within an industry dominated by four huge multinationals: Otis, Schindler, Kone and ThyssenKrupp.

When it comes to Canada’s elevator market, those companies have been in a race to the bottom in their efforts to grab market share, Isabelle said.

Thirty years ago, he said, a technician would typically service about 35 to 45 elevators for about $1,000 per elevator a month. The maintenance contract included everything needed to keep the elevators humming—excluding extraordinary events such as flooding or vandalism.

Nowadays, he said, that same contract might be worth about $600—with each technician responsible for 100 elevators.

“We’re into almost this downward spiral,” Isabelle says. “Service technicians are getting loaded up more and more, having less time to do preventive maintenance. The less preventative maintenance you do, the more problems you’re going to have.”

None of the four companies—whose European operations were fined more than $1 billion in 2007 for collusion—would comment on the crisis. Similarly, the Canadian Elevator Contractors Association, which speaks for smaller elevator companies and suppliers, refused to discuss the situation.

“We are too busy,” said Catharine Bothwell, the association’s executive director.

Property owners and managers—particularly those looking after older buildings—are increasingly dealing with an expensive dilemma as parts and technicians familiar with the aging equipment become hard to find or disappear altogether.

Brent Merrill, CEO of Metcap Living, said rental-apartment landlords, faced with a constant cycle of repairs, are being forced into elevator modernization that can cost between $150,000 and $300,000 each—and keep the lift out of service for months. The expense, he said, can only be partly recovered from residential tenants over several years.

“We’ve got to choose between four or five companies,” Merill says. “The (big) elevator companies do not service the elevators as well as a smaller company, or as well as they used to.”

About 1,550 of Ontario’s 18,000 residential building elevators are more than 50 years old and another 10,000 are between 25 and 50 years old. But even those shiny elevators in new condo buildings are not immune from outages.

“The part needed has been shipped from China and should arrive in Toronto by next week,” one harried manager of a new, upscale condo told restless residents at the end of May. “We are hopeful that the work should be completed by mid-June.”

Ben McIntyre, business manager for Local 50 of the International Union of Elevator Constructors in Ajax, Ont., said some landlords are simply unable or unwilling to spend the needed money. But the real problem, he said, is that routine maintenance has gone by the wayside as overloaded technicians attend to only the most pressing problems.

McIntyre also complains about the dominance of the few big players in the tight-knit industry.

“They really rule it with a tight fist and it’s all about bottom lines more than it is about customer satisfaction or for the riding public,” McIntyre said. “If they can cut a corner to make their bottom line look better … they will. It’s only when an accident happens or something happens, then they start pointing fingers.”

And accidents do happen.

Last year, for example, an elderly man’s legs were severed in an elevator mishap in Ottawa. Lean said she suffered vertical whiplash in her incident.

In all, eight people were permanently injured and another 119 were slightly hurt in Ontario elevators last year—mostly due to what the province’s independent safety regulator calls “user behaviour.” In addition, such injuries have been rising by six per cent a year for the past eight years.

British Columbia has also had about three elevator fires a year over the past decade—most caused by electrical or mechanical failures—while Ontario sees an average of about five a year, half of which are believed to be the result of a problem with the lift itself.

Elevator injuries, however, remain relatively rare. Putting a price on user inconvenience is harder to quantify.

Some of the most problematic elevators in the country are found in Toronto’s public housing buildings, many of them high-rise.

Some well-heeled landlords—particularly in downtown office buildings—have begun paying a premium to ensure their elevators get first-rate service, creating a further strain on limited resources. But they are a tiny minority.

“The status quo does not work,” Isabelle said. “Something has to change.”

That change, he said, has to start with an end to undercutting by the big companies and higher revenues per device, which in turn should make routine maintenance more viable. He’s not optimistic.

In the interim, pressures continue to increase.

Ontario’s regulator has mandated the upgrading of single-speed elevators typically found in buildings of three to five storeys. That will increase demand for technicians and equipment, force landlords to dig into their pockets, and could leave more people lugging groceries up the stairs, all but trapped on higher floors, or stuck waiting for rescue.