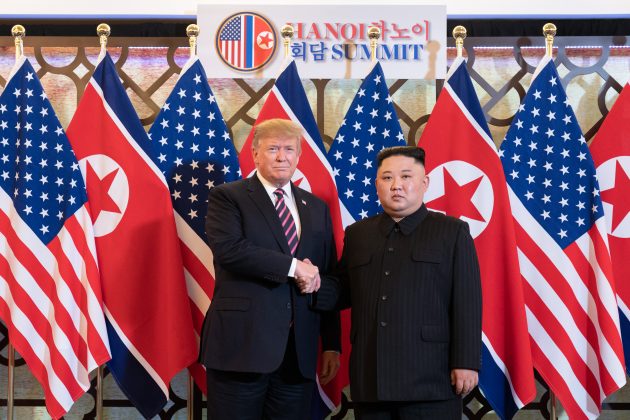 TOKYO – North Korean leader Kim Jong Un is cautiously turning up the heat after his unsuccessful summit with President Trump in Hanoi two months ago.

Returning to military optics for the first time in five months, Kim on Tuesday paid a surprise visit to an Air Force base to inspect fighter combat readiness and followed that up the next day by supervising the test of what the North’s official media described ominously but ambiguously – and without any photos or video – as a new type of “tactical guided weapon.”

The military-related posturing comes after Kim expressed deep disappointment earlier this month with what the North claims was an inflexible, “gangster-like” demands by the U.S. in Hanoi.

It also comes as the Kremlin announced Thursday that Kim will visit Russia later this month at the invitation of President Vladimir Putin. It gave no further details.

Putin has been something of an outsider over the past year as Kim has held multiple summits with the leaders of China, the United States and South Korea. But he could provide important political cover or economic aid for North Korea – and a potential headache for Trump – if he chooses to play a bigger role.

Though Kim claims he still has a good personal relationship with the U.S. president, he and senior North Korean officials have shown increasing frustration with Trump’s top advisers, Secretary of State Mike Pompeo and national security adviser John Bolton.

“The Hanoi summit gives us a lesson that whenever Pompeo pokes his nose in, the talks go wrong without any results even from the point close to success,” Kwon Jong Gun, director general of the American desk at the North’s Foreign Ministry, was quoted as saying on Thursday. “I wish our dialogue counterpart would be not Pompeo but (some) other person who is more careful and mature in communicating with us.”

In an address to the Supreme People’s Assembly, the North’s version of parliament, Kim gave the U.S. until the end of the year to come up with a more mutually acceptable negotiation strategy.

For North Korea, that would mean lifting the sanctions it has imposed against the North over its development of nuclear weapons and missiles capable of reaching the U.S. mainland.

Kim indicated, however, that he would in the meantime maintain his self-imposed moratorium on nuclear tests and long-range missile launches and he appears to be standing by that vow.

U.S. military officials said they did not detect any significant missile launches on Wednesday and the North’s description of the “newly developed ultramodern tactical weapon” suggested it might have instead been an anti-tank guided missile or other short-range system.

If so, it was likely intended to be a response to recent military drills by U.S. and South Korea.

Just before the reports of the weapon test, a North-run propaganda website said the drills fuel “the mood for a fight and risks of war.”

Washington and Seoul have renamed and scaled back their joint manoeuvrs since early last year, when the South hosted the Winter Olympics. They have continued that policy since Kim’s first summit with Trump, in June last year, but the North claims even the smaller versions run counter to the spirit of dialogue.

Since Hanoi, Kim and senior North Korean officials have also been openly critical of South Korea and efforts by President Moon Jae-in to play the role of middleman, saying he has adhered too closely to his American allies and dragged his feet on inter-Korean projects that would provide the North with crucial investment to build its sagging infrastructure.

Moon has expressed an eagerness to engage with the North on such projects, but Washington wants it to stick to sanctions.

North and South Korean leaders have met three times and Moon has said he is ready to meet again at any time. Trump has also suggested he wants a third summit. But there are growing worries that the progress could be killed by mismatched demands between the U.S. and North Korea over sanctions relief and disarmament.

Washington says it won’t allow the North’s desired sanctions relief until the nation commits to verifiably relinquishing his nuclear facilities, weapons and missiles. Kim has shown no signs that he’s willing to give away an arsenal he may see as his strongest guarantee of survival.