Airbus delivers A220 jet to Delta, hoping to bring venture back to black 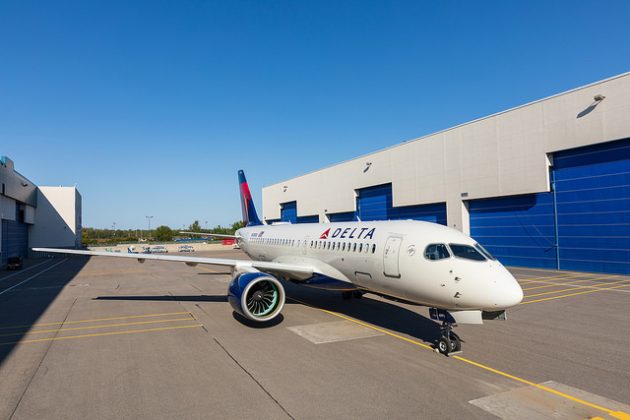 MIRABEL, Que. – Airbus SE delivered its first A220 aircraft to Delta Air Lines Inc. on October 26, the first airline in North America to buy the jet formerly known as the Bombardier C Series.

Bombardier chief executive Alain Bellemare said Airbus can lend the plane greater scale and acknowledged that the C Series led his company on a “challenging journey.”

The European company acquired a majority 50.01 per cent stake in the C Series effective July 1, leaving Bombardier with 31 per cent and its name stripped from the jet, but poised to benefit as a minority owner.

Both Faury and Bellemare weighed in on the ongoing U.S. tariffs on Canadian steel and aluminium products.

“Aviation is a sector that depends on free access to the market, so we are very hostile to anything that reduces or endangers capacity,” Faury told reporters following a ceremony that included an acrobat dangling from a rope in front of footage of rolling clouds at Bombardier’s manufacturing facility near Montreal.

Bellemare said tariffs were not a major “preoccupation,” particularly since the industry is global and “dynamic,” allowing for an array of supply options.

The Atlanta-based company’s A220 fleet is slated to reach four this year and roughly two dozen in 2019.

Airbus says it will start producing A220s for the U.S. market at a new plant in Mobile, Ala., starting in 2019, with deliveries coming a year later.

The 100-to-150-seat jet is already in operation at three other airlines.