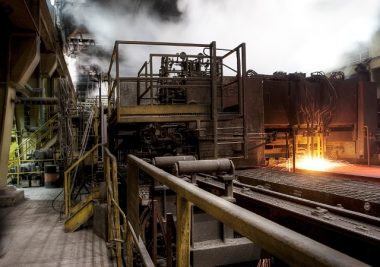 Oxygen is one component in the steel-making process. Air Liquide built an oxygen pipeline connecting its Hamilton plant to nearby ArcelorMittal Dofasco in 2015 to help boost energy efficiency. PHOTO: ArcelorMittal

The company did not release the value of the investment, but said the expansion project is a result of higher demand for oxygen, nitrogen, and argon from its Ontario customers, including major Hamilton steel producer ArcelorMittal Dofasco.

Last year Air Liquide Canada built an approximately $12 million oxygen pipeline between its Hamilton plant and the Dofasco facility— a project that helped the company pare down its electricity usage by increasing its energy efficiency. Partly funded by Ontario’s Independent Electricity System Operator’s (IESO) saveONenergy Program, the cleantech project reduced Air Liquide’s electricity usage by more than 30,000 megawatt hours per year, and is one of the drivers of the new air separator upgrade.

“We are proud that a joint public and private investment in energy efficiency is leading to new growth in one of Canada’s largest industrial areas,” Adam Peters, president and CEO of the company’s Canadian operations, said. “Air Liquide has operated in Hamilton since 1940, and this investment will help ensure that we continue our operations in Ontario for the foreseeable future.”

The company plans to begin upgrading the air separator shortly and expects to complete the work by April 2017.