Under his leadership, Air Canada Cargo posted record revenues in 2021 and continues to grow its business through critical investments in infrastructure and technology. 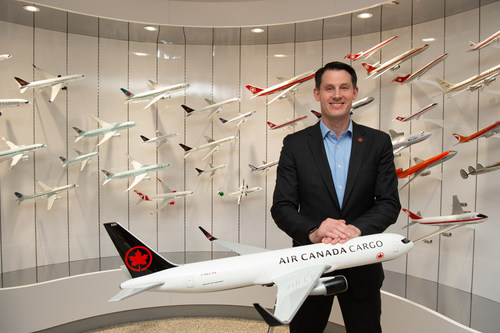 MONTREAL — Air Canada congratulated Jason Berry, Vice-President, Cargo, on being named Executive of the Year by Air Cargo World, one of the longest-standing publications focused on the transportation and logistics industries.

“This award is a very well-deserved recognition for Jason, which I know he shares with his team. Since joining Air Canada to lead our cargo division, he has demonstrated his ability to build and lead a strong team that is well positioned to drive our cargo business forward,” said Lucie Guillemette, Executive Vice-President and Chief Commercial Officer, Air Canada. “Coming to Air Canada Cargo at the height of the pandemic presented a unique set of challenges, and he rose to meet them head on. He sought out new opportunities, implemented new strategies, oversaw the introduction of our Boeing 767 freighters and furthered investments in technology and our people to position the business for growth and continued success.”

Under his leadership, Air Canada Cargo posted record revenues in 2021 and continues to grow its business through critical investments in infrastructure and technology.

Berry joined Air Canada Cargo in January of 2021 and has overseen the transformation of the cargo division through the pandemic on the global supply chain issues. The most visible sign of that transformation has been the entry into service of dedicated Boeing 767-300 freighters, with two in operation and eight more on the way.

To determine the 2022 Air Cargo Executive of the Year, Air Cargo World’s editorial team elected four leaders in airfreight based on notable contributions, such as innovation and growth, made in 2022. Air Cargo World also received feedback from a 300-plus reader survey, which the editorial team used in its final evaluation.