Structural failure killed 1,100, many of whom made clothes for 29 global brands, including Loblaw's Joe Fresh 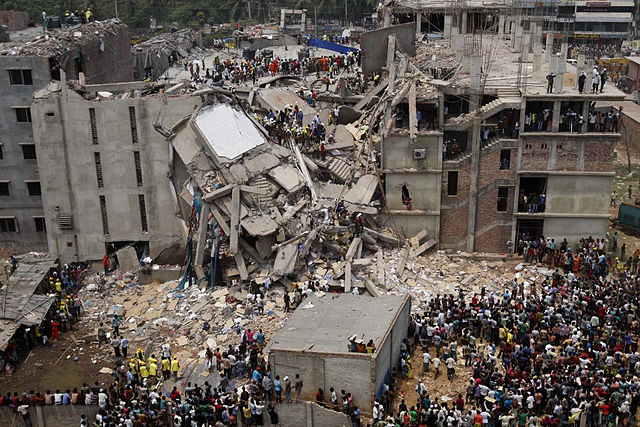 NEW DELHI—A court in Bangladesh’s capital accepted murder charges Monday against 41 people including the owner of the Rana Plaza building that collapsed in 2013, killing more than 1,100 people in the country’s worst industrial disaster.

Most of the victims were garment factory workers who made clothing for about 29 global brands, including Joe Fresh from Loblaw.

Investigators initially had said the accused would be charged with culpable homicide, but they shifted to the more severe charges after the investigation found that building owner Sohel Rana, his staff and the management of the five garment factories had forced workers to enter the building just before it collapsed even though the workers feared doing so because major cracks had developed in the structure a day earlier.

The maximum penalty for someone convicted of murder is a death sentence, while the maximum punishment for culpable homicide is seven years in jail.

The court of Senior Judicial Magistrate Md Al-Amin decided to go ahead with the trial after accepting the murder charges filed by police in June.

The police report called the deaths a “mass killing.” About 2,500 people were injured in the disaster.

Rana and the owners of the five garment factories are among the 41 defendants accused of murder. While Rana is in jail and 16 others are on bail, the magistrate issued arrest warrants against 24 others, said police prosecution wing officer Mohammad Asaduzzaman.

He said the police would take steps to arrest them. The court told police stations to submit updates on which arrests have been made when the court next hears the case on Jan. 27.

In a separate case, the accused also facing charges of violating safety rules in building Rana Plaza. The original five-storey building was meant for office space and retail stores, but more floors were added illegally and transformed into factories.

The extremely low wages in Bangladesh led global brands and retailers to choose its garment industry over factories in China and other developing countries.

The building collapse triggered an uproar for reforms in a sector that helps the country earn about $25 billion a year from exports, mainly to the U.S. and Europe.

The owner of Joe Fresh, Canada’s largest grocery, pharmacy retailer, was among the first to commit financial support for victims of the disaster. However, a class action on behalf of victims was filed in Canada against Loblaw and Joe Fresh in April.

—with a file from The Canadian Press.