40 per cent of Canadian companies plan to add staff in 2022, according to Robert Half

According to the research, 89 per cent of managers say it is challenging to find skilled professionals, primarily due to a lack of qualified talent (40 per cent). 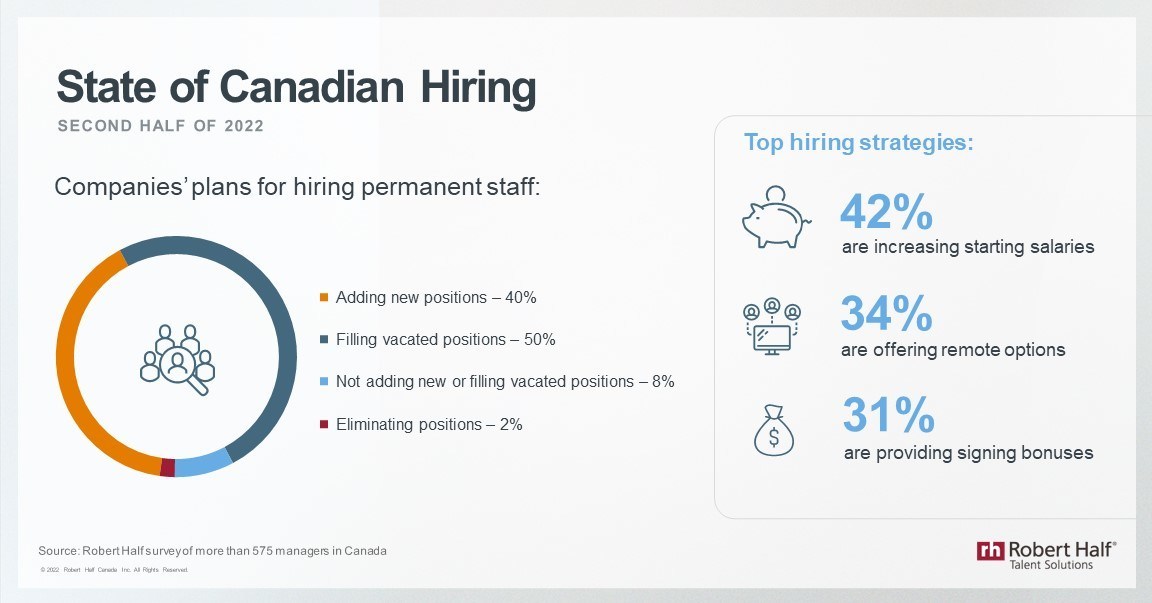 TORONTO — The job market will remain strong for the latter part of 2022, research from talent solutions and business consulting firm Robert Half shows. According to the company’s State of Canadian Hiring Survey of more than 575 managers, 40 per cent of respondents anticipate adding new permanent positions during the second half of the year; 50 per cent expect to fill vacated positions, and only 10 per cent foresee hiring freezes or layoffs.

Forty-five per cent of managers across several industries plan to bring in more contract professionals by year-end — especially in marketing and creative (63 per cent), legal (53 per cent), and finance and accounting (51 per cent). In addition, 73 per cent of employers intend to hire more entry-level or early-career professionals.

“Despite talk of a potential economic slowdown in Canada, skilled professionals remain in high demand with many companies planning to hire during the second half of the year,” said Deborah Bottineau, district director, Robert Half Canada. “In addition to hiring for critical full-time functions, employers are relying on contract talent to stay agile in an ever-changing hiring landscape.”

According to the research, 89 per cent of managers say it is challenging to find skilled professionals, primarily due to a lack of qualified talent (40 per cent), and candidates’ salary expectations being higher than what their company is willing to offer (22 per cent).

In turn, employers who have the resources are using a range of recruiting tactics to win over skilled workers:

“While the Canadian economy continues to fluctuate, workers remain in the driver’s seat,” added Bottineau. “With retention top of mind for many organizations, prioritizing employee well-being, engagement and professional development can positively impact overall loyalty, morale and job satisfaction.”