3D printing to benefit the dental health of walruses 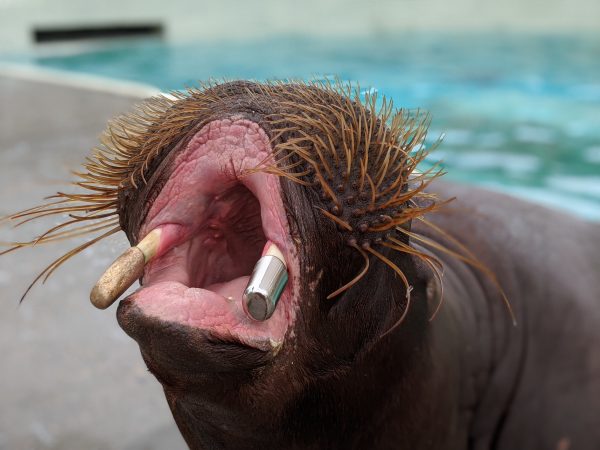 Thanks to the three-dimensional printing, a four-year-old female walrus weighing over 400 kg was able to receive a protective crown in less than five minutes, and without the need for anesthesia. (CNW Group/École de technologie supérieure)

MONTRÉAL — Three-dimensional printing is opening up new possibilities, and animals are benefiting from this, as demonstrated by a procedure performed on a walrus from the Aquarium du Québec. Thanks to this technology, a four-year-old female walrus weighing over 400 kg was able to receive a protective crown in less than five minutes, and without the need for anesthesia. The procedure was made possible by the expertise of Vladimir Brailovski, a research professor in mechanical engineering at the École de technologie supérieure (ÉTS); Dr. Claire Grosset, a professor of zoological medicine at Université de Montréal and a veterinary at the Aquarium du Québec; and Dr. Yvan Dumais, a clinician and teacher in veterinary dentistry at Université de Montréal.

To prevent fracturing and cracking of these mammals’ tusks, veterinary medical experts recommend protecting the tusks with made-to-measure metal crowns, or caps. The technique helps avoid the need to remove the tusks, which is a more invasive procedure for the animal.

Since the metal with which crowns are manufactured varies from one institution to another, the team had to determine the metal best suited to 3D printing, a technique never before used to design crowns for these animals. The metal had to offer maximum resistance to repetitive rubbing and compression, and would not oxidize in salt water.

“We finally opted for cobalt chrome, a biocompatible alloy that is both hard and resistant to abrasion,” said Brailovski in a prepared statement.

To ensure a perfect fit between crown and tusk, Brailovski and his students Anatolie Timercan and Morgan Letenneur created three crowns, each of which offered a clearance of 0.25 to 0.45 mm between the tusk and the crown. The veterinarian was thus able to choose the one that best suited the walrus: too wide a gap between the tusk and crown would weaken the bonding of the glue, while too narrow a gap would keep the crown from fitting snugly against the tusk’s surface. This careful approach sought to offset any errors that could have accumulated in the different stages of the process, from the physical taking of the tuskprint to its digitization and modeling using a 3D laser scanner and to the installation of the crown.

Aside from manufacturing the crown, a solution had to be found for installing the crown onto the walrus tusk without the use of anesthesia, as the mortality rate under anesthesia is particularly high for this species. Thus, over a period of several months, the walrus underwent training three or four times a day to increase its ability to remain immobile. The trainer rewarded these periods of immobility—which became increasingly longer—with a treat the walrus liked. The strategy paid off: the walrus ultimately stayed still for five minutes.