November 23, 2015  by Canadian Manufacturing.com Staff, with a file from The Canadian Press 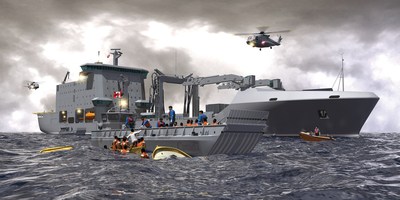 OTTAWA—As reports of the new Liberal government pausing a plan to acquire a temporary supply ship for the Royal Canadian Navy continue to circulate and as politicians and business leaders trade barbs, the Shipbuilding Association of Canada has come down squarely on the side of Chantier Davie.

“The association strongly recommends that the government do not delay the signing of the contract for this urgent operational requirement,” the industry group said Nov. 23. “It has been awarded fairly and with due process.”

The association highlighted the urgent procurement process kick-started under the previous Conservative government in Dec. 2014.

“Following an extensive consultation period lasting for six months and subsequent evaluations by those departments, Canada selected the Davie proposal on its merits ahead of other domestic and international bids,” the industry group said.

The Shipbuilding Association of Canada also highlighted the ship’s reported cost of $400 million, saying it represents “great value-for-money” compared to approximately $1.5 billion for a new ship. Defense sources have noted the amount could be higher, however.

In addition, the industry group insisted Davie has pan-Canadian supply chain that “provides significant economic benefits for the entire shipbuilding industry, including Aecon Pictou, a first tier subcontractor who will build multiple sections of the ship in Nova Scotia.”

Dismissing the sole-source argument, the association also chided “certain shipyards” for claiming they could contribute to the project in a timely manner while their shipyards are already at maximum capacity.

“With claims of being at maximum capacity, Seaspan Ferries placed an order for two ferries for use in Canadian waters, to be built in Istanbul, Turkey. Similarly, Atlantic Towing – a JD Irving company – has recently resorted to building their own ships, for use in Canada, in Galati, Romania,” the association said.

As speculation continues, the industry organization said it was “encouraged” by government of Canada statements made late last week which implied there would be no delay and a “positive outcome” would be reached.