Unifor takes to the skies with a message for Premier Ford 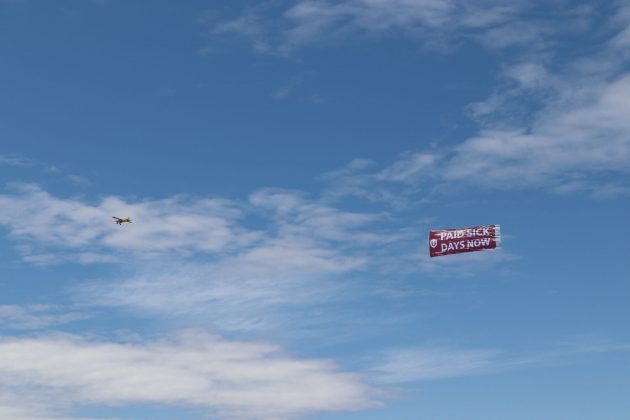 TORONTO — Unifor took to the skies above the Greater Toronto Area with a bold message to Premier Doug Ford in regards to paid sick leave.

“We are running out of ways to get the message across to the Premier that workers need permanent, adequate sick leave, enshrined in employment standards legislation. So today, we brought the message right to his house, and to millions across the region, with a method that’s hard to ignore,” said Jerry Dias, Unifor National President. “When we say that Ontario’s workers need paid sick days, we mean employer-paid sick leave that they can rely on, without question, during this pandemic and forever.”

The message of support for paid sick days flew on May 1 from Oshawa, over Toronto, and to Brampton, with a tour in Etobicoke North.

Unifor first wrote to Premier Ford in March 2020 outlining the need for paid sick days to stop the spread of the COVID-19 pandemic.

“For the past year, Unifor and our members have written letters, called, met with and tried everything in our power to make the case for permanent paid sick leave for all workers in the province. As new variants rip through workplaces and communities, Doug Ford’s government stalled and then delivered a new benefit that is not adequate, and brings new gaps that may leave some workers even worse off,” said Naureen Rizvi, Unifor Ontario Regional Director.

Unifor advocates for universal paid sick days to be enshrined in labour law in Ontario that includes:


Related Stories
Unifor calls for more than five paid sick days for workers in B.C.
Ontario paid sick leave plan ‘inadequate, unfair,’ according to many businesses
Unifor announces Nestlé workers on strike in Toronto as of May 1
Unifor reaches deal with Metro Inc. to avoid strike