$700-million investment will be going to one of Ford's two engine plants in Windsor, Ont., but the 6.8-litre engine currently in production will be phased out 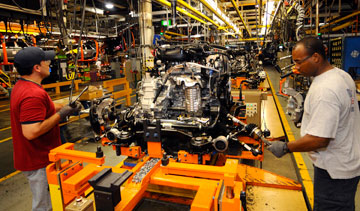 TORONTO—The union representing 6,700 autoworkers at Ford in Canada said it has reached a tentative agreement and secured a $700-million product investment from the automaker after a tense round of talks that went past the midnight deadline.

Unifor president Jerry Dias made the announcement about half an hour after the strike deadline.

Ford workers at Ontario operations in Bramalea, Oakville and Windsor were prepared to go on strike if a deal was not reached.

Dias said the “overwhelming majority” of the $700-million investment will be going to one of its two engine plants in Windsor, Ont.

He said the investment will put the plants “at the top of the food chain for powertrain operations.”

“This new engine will be the highest technology, will be the most fuel efficient, will have incredible torque, horsepower and will be put into Ford’s No. 1-selling vehicles throughout the North American chain,” he said at a news conference early Tuesday in Toronto.

The other plant will still build 6.8-litre engines, but that will eventually be phased out, Dias said.

He and Windsor Local 200 president Chris Taylor would not reveal whether employment at the Windsor plants would increase or decrease as a result of the deal. They said they wanted to present the agreement to union members first.

Ford’s plant in Oakville, Ont., will not be getting any new products, but Dias said Ford secured “a framework to get us to the next investment,” which he added will include refreshes to the Ford Edge and the Lincoln MKX.

“We were able to ensure that our Oakville facilities are going to be the primary builder for export vehicles internationally.”

Union members will have the final say on the agreement when a vote is held at local membership meetings on Saturday and Sunday.

Dias said his negotiating group is unanimously recommending the deal, which he said includes wage increases for the company’s “legacy” workers.

Unifor was seeking a deal similar to those it reached with General Motors and Fiat Chrysler America in pattern bargaining that began in the summer.